Understanding the Venus cycle can help you in all of your relationships,
from romantic to business to family.
Venus is the Lover and Mediator in you.
To learn how to find the right partner for you
and improve all your relationships,
Contact Pandora Astrology for a Lifelong Love reading. 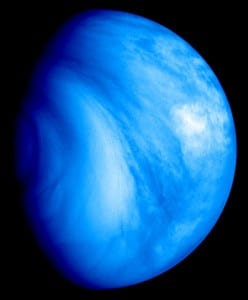 Venus, goddess of Love and Beauty, goes retrograde in our skies about every year and a half.  When she does, she takes us into a six-week journey into the past to uncover what may be the hidden or forgotten places in our relationships.  Each time Venus goes retrograde I write a post or series of posts about it. 2018’s Venus Retrograde period contained themes that fit the 90’s film Pretty Woman, so here is a post describing in detail the parallels between this transit and the movie.

What Is Venus Retrograde?
When Venus goes retrograde, she takes our hand and pulls us into the darkness of our relationships.  A retrograde period of any planet is a retrospective of that planet’s themes.  It is like going into the deep, dark cave of oneself in whatever area of life is covered by the planet that is retrograde.  It is a time of moving backward, perhaps of going back to pick up pieces lost in the past.  It is a retrieval, a turning inward, perhaps a letting-go.  Since Venus’ domain is relationships, this turning inward happens in that domain.

How Long Does It Last?
The Venus retrograde period usually lasts about six weeks.

In 2018, Venus went retrograde in the sign of Scorpio on October 5, 2018 and retrograded back into Pisces, finishing on November 16, 2018.  This brought up relationship issues which would not fully resolve until Venus had again turned direct and also passed the degree of Scorpio where she turned retrograde, which happened on December 17.  On that day she was done retracing old relationship ground and her mission to teach us about relationships was over for the year.  Venus went retrograde in 25º Libra to 10º Scorpio, so if you have anything at all in your chart between 0 and 10º of Scorpio, Taurus, Aquarius or Leo, this likely affected you. It also affected you if you have anything at all in 25 to 29º of Libra, Capricorn, Aries or Cancer.

The Venus Cycle and Its Milestones
The grand cycle of Venus begins and ends with a day of “Ah-ha!” or epiphany. This happens when Venus conjuncts the Sun while moving forward swiftly and it brings an “Ah-ha!” in our relationships and helps them progress at speed. There are two of them and they act like bookends, forming the beginning and ending of a Venus cycle. I call these Relationship Rapture Days and you can see on the diagram below that the previous cycle began with one on January 8, 2018 at 18º Capricorn and finished with one on August 13, 2019 at 21º Leo. Relationships formed within a week or two of a Relationship Rapture Day tend to be solid, forward-looking relationships that can look forward to a long lifespan. Events in these relationships move forward with speed and decisiveness.

There is another kind of epiphany during the Venus cycle—it occurs while Venus is retrograde, on the day she conjuncts the Sun.  I call this Relationship Clarity Day, because if Venus retrograde has been putting your relationship through the wringer, clarity is likely to come on this day, leading to a deeper intimacy and authenticity in your relationship. Alternatively, it can also bring the clarity that leads to a breakup or a discussion of irreconcilable differences pointing to a likely breakup. The previous cycle’s Relationship Clarity Day was on October 26, 2018, at 3º Scorpio.

And there is a third, very important point in this cycle and that’s the day when Venus once again returns to the place where it first went retrograde (10º Scorpio), this time to pass through and onward. I call this Relationship Resolution Day and it happened on December 17, 2018. On this day the cycle’s themes resolved and completed. 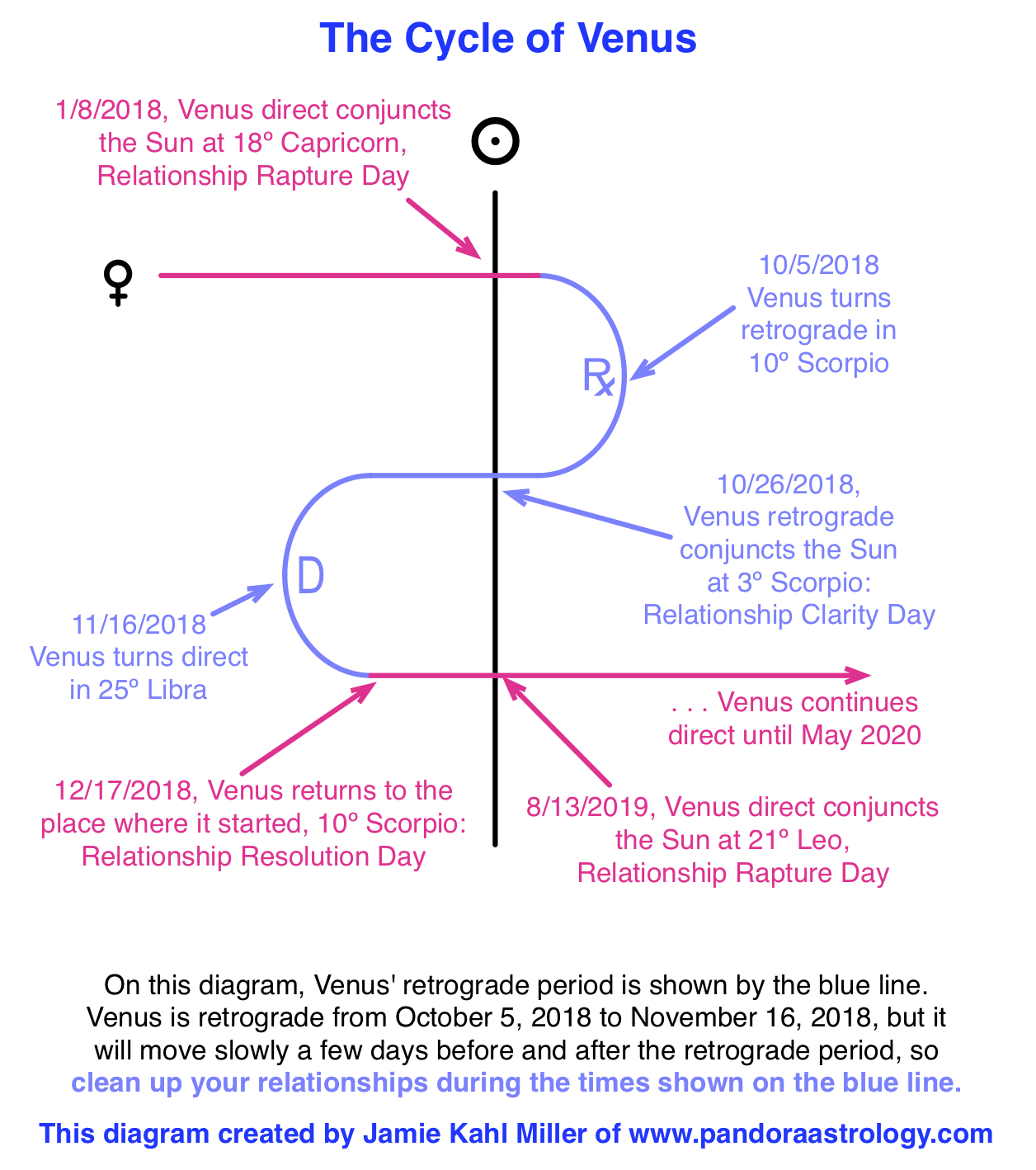 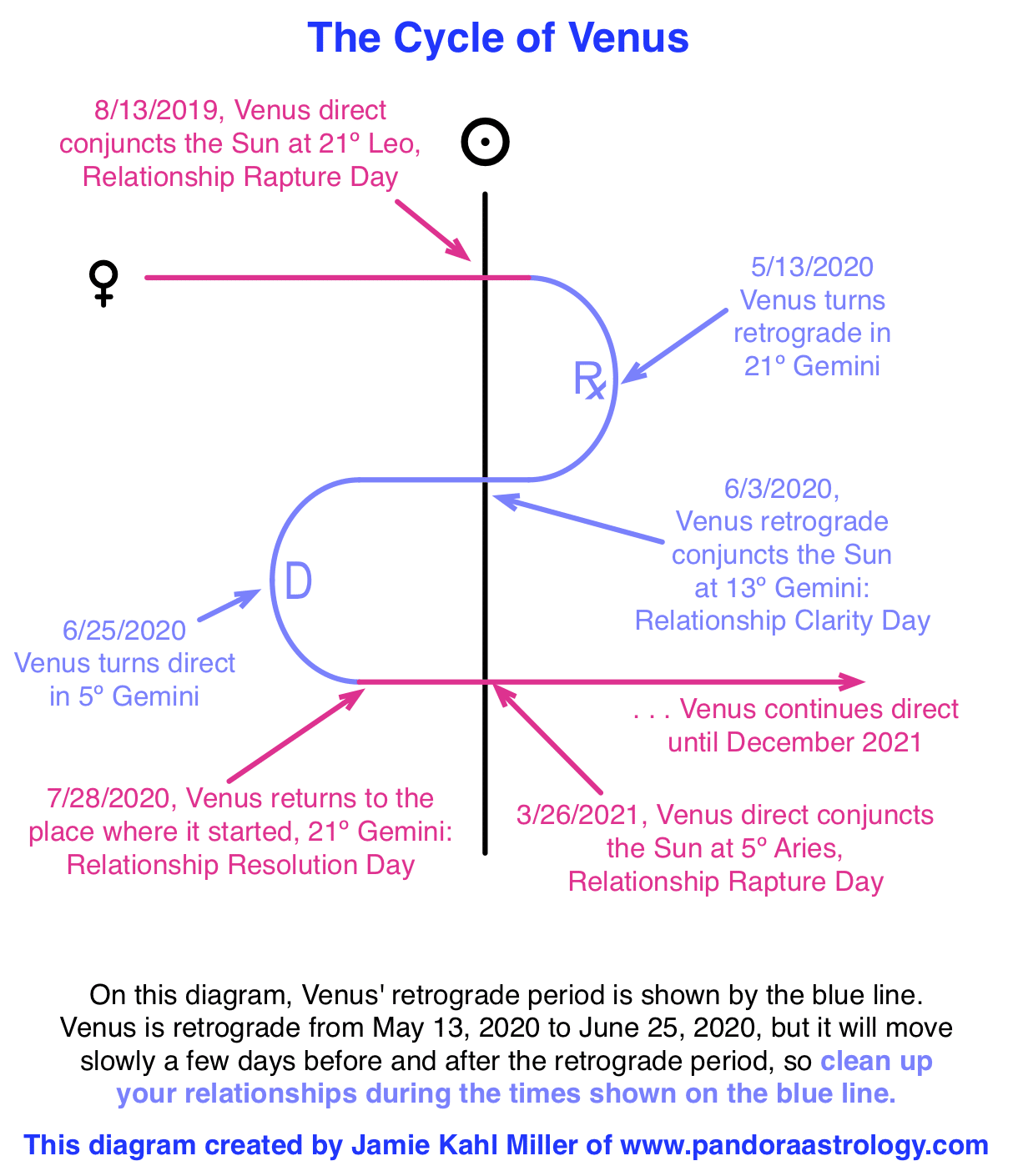 Venus Retrograde in Scorpio and Libra:
Because 2018’s Venus retrograde period began in the rough-hewn and underworldy sign of Scorpio and backed up into graceful and mannered Libra, this cycle began with a sexual intensity, passed through a period of refinement and concluded with a feel of deeper intimacy than was possible before. This particular Venus retrograde period has strong parallels with the romantic comedy Pretty Woman. Read more about it here.

Did this affect you?
There’s no doubt you would feel this transit in the area of life corresponding with the house Venus is retrograding through in your chart. That’s something you can find out about in a reading. There’s also no doubt that if your Sun is in a degree along Venus’ retrograde path, you would feel it too. Here are the birthdates (in any year at all) that were strongly affected by 2018’s Venus retrograde period:
October 18 to November 3
January 15 to January 30
April 14 to May 1
July 17 to August 3

When has this happened before?
In past years, I have written post-threads during Venus Retrograde periods.  In these threads I have drawn from mythology to show the unfolding of this journey as it happens.  These are among my best-loved posts of all time, so I’m giving new readers access to them, even after Venus moves on:

Venus Retrograde period of March and April 2009:
Descent into Love’s Darkness
All about Inanna’s descent into the underworld to reclaim her dead love.

Venus Retrograde period of October and November 2010:
The Tale of Eros and Psyche, or How The Soul Got Her Wings
The classic tale of love lost and refound.

And this post-thread about the Venus Retrograde period of July to August 2015:
Rapunzel, A Tale of Adolescent Awakening
Feminine power and creativity escapes from her isolated tower.

If you are feeling a current Venus Retrograde period
and you want to understand its effect on your relationships
request a reading on Jamie’s services page.