This Year’s Stations of Uranus

You may have heard of Mercury retrograde and wondered what that means astronomically.  “Retrograde” means “moving backwards,” so when Mercury is retrograde, it is moving backwards in apparent motion from our viewpoint here on Earth.  This means that instead of progressing forward through the zodiac, from one sign to another, Mercury is actually backing up.  It’s a visual illusion, but a meaningful and measurable one.

I call these stations “pivotal days,” because the planet we’re talking about is literally pivoting—and also because stations tend to lead to pivotal events for those of us Earthlings who are being affected by them.  Those pivotal events will trigger changes in us, and that will happen according to the nature of the transiting planet, in this case, Uranus.

How does Uranus change us?  Breakthrough comes only after breakdown.

Uranus brings the “Eureka!” or the “Aha!” moment of insight, that lightning-bolt-from-the-blue that disrupts your normal everyday assumptions and introduces an idea so new, so startling, so crazy that it just might work.  This sudden insight is followed by a cascade of change that challenges the very framework your life has fitted into in the past.  Uranus brings progressive, revolutionary, dimensional shift, after which nothing looks the same, nothing holds the same meaning, and some things are rendered irrelevant.  Flat earth becomes round world after Uranus whips through your life.

Uranus teaches us a fundamental truth:  a fresh, greater and more inclusive order only comes after a chaotic mess.  A transit of Uranus is accompanied by a restlessness that causes you to want to dash it all to pieces.  You don’t actually have to destroy everything you’ve built in order to shift to the next level, but you may have to tolerate some uncomfortable mess as you search for the new frame to put it all into.

Movement of Uranus this year:

Find out more here: Are You Currently In Transition? 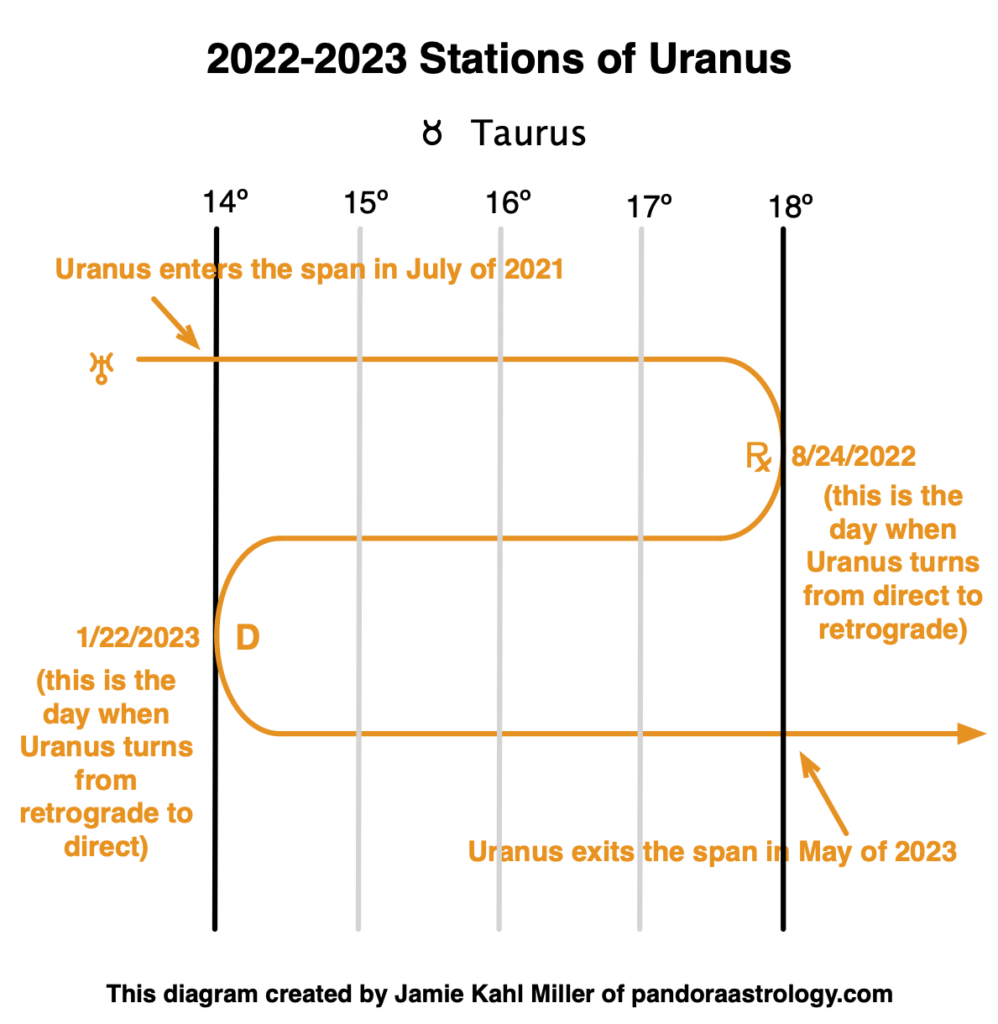 You’ll feel a transit the most strongly when it’s exact and also during its stations, or pivotal days. So if you have Venus at 16 degrees of Leo, you’ll feel Uranus’ influence the most strongly when Uranus is passing through 16 degrees of Taurus, and also on the days it turns retrograde and direct. In a reading you can get a diagram of this that’s personalized for you and shows the exact dates to watch for. It shows you which of your own planets is being triggered by Uranus and we talk about what it means for you and where in your life to look for its effects. This gives you a chance to see what’s coming and plan how to respond to it. Getting this kind of personally timed information is the main reason people consult astrologers.

How to handle your Uranus transit:

The best response to a Uranian insight is to open your mind up and engage in a search for a new frame, a new context, a new order in which all the old pieces make sense, and the new ones also fit.  Uranus turns your head around—that’s what he’s for.  Embrace progressive, future-oriented ways of being and behaving.  You may feel trapped, stuck and itchy, but think carefully before you react, rebel or make a change you might regret.  Look for the way through the chaos and you’ll find that a whole new life is just around the corner—yours for the claiming.

If you’d like to find out whether
you’re having a Uranus transit this year,
and you want to thrive with it,
Contact Jamie for a reading.

Learn about Uranus in Taurus and other transiting planets in signs this year.
Here’s my blogpost about Uranus in Taurus–Radical Change in Food and Money.
Here’s a video I made about Uranus Transits–How They Feel and How To Handle Them.
Here’s how to know if you’re having a transit this year:  Are You Currently In Transition?
Read my Frequently Asked Questions about astrology.