This Year’s Stations of Pluto

You may have heard of Mercury retrograde and wondered what that means astronomically.  “Retrograde” means “moving backwards,” so when Mercury is retrograde, it is moving backwards in apparent motion from our viewpoint here on Earth.  This means that instead of progressing forward through the zodiac, from one sign to another, Mercury is actually backing up.  It’s a visual illusion, but a meaningful and measurable one.

I call these stations “pivotal days,” because the planet we’re talking about is literally pivoting—and also because stations tend to lead to pivotal events for those of us Earthlings who are being affected by them.  Those pivotal events will trigger changes in us, and that will happen according to the nature of the transiting planet, in this case, Pluto.

How does Pluto change us?  By putting us through a death and rebirth experience, a “long, dark night of the soul.”

A Pluto transit is the most profound of all the planetary transits:  it is nothing less than a total and complete transformation from one way of being to another.  In nature, this is best illustrated by the metamorphosis of a caterpillar into a butterfly.  In the cocoon, the caterpillar’s structure is lost in a meltdown to a mass resembling stem cells, from which, miraculously, the animal finds a new shape as butterfly.  For human beings, this is a psychological process during which we often feel we are in meltdown or “lost in the dark,” not knowing what we are to become or what life will be like when we emerge.

This calls for a deep trust in the ways of nature and in oneself.  It requires letting go of that which needs to pass away and allowing the new to come forth, without knowing what is to come.  This is terrifying for human beings, who want to be in control.  During a Pluto transit the need to be in control can lead to out-of-control behavior, addictions and power struggles, both within and without.  But does it have to be this way?  Not really.  Not if you learn to let go of control and allow change to pass through your life.

This will affect the area of life ruled by whatever planet of yours that Pluto is transiting.  For example, Pluto transiting your Midheaven might make you feel that you can’t face your career anymore, that it’s dying and you need a change so fundamental that your career will be entirely different afterward.  Pluto transiting your Moon can bring up emotions you didn’t know you had and can bring things to light about your family you didn’t know were there, resulting in breaking or deepening family bonds (your choice).  Pluto transiting your Sun might mean the death of your old core identity and some time spent in meltdown as you try to figure out who you are becoming, followed by emergence of a new identity that feels more authentic and true than ever before.

Movement of Pluto this year: 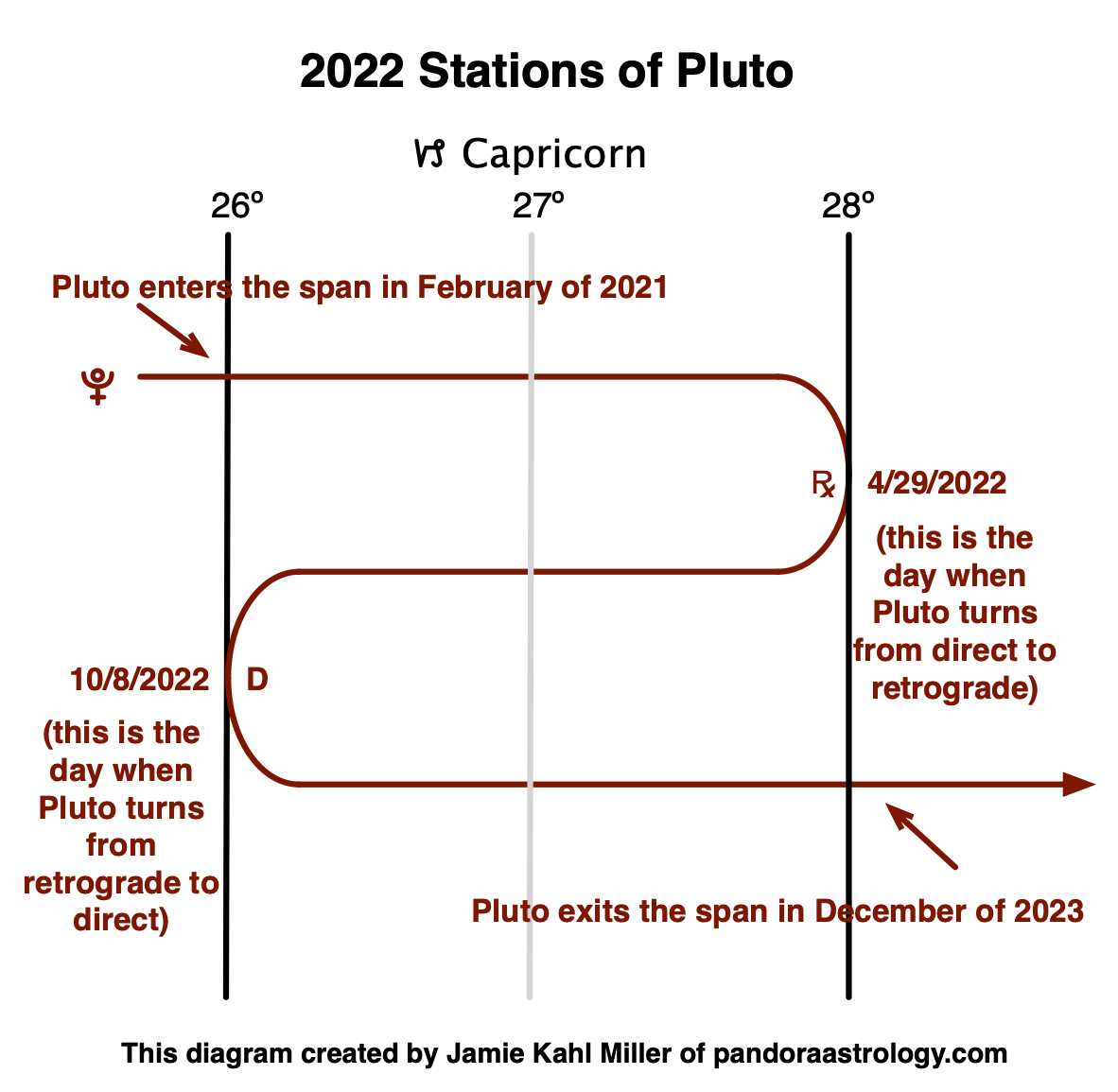 You’ll feel a transit the most strongly when it’s exact and also during its stations, or pivotal days. So if you have Venus at 27 degrees of Libra, you’ll feel Pluto’s influence the most strongly when Pluto is passing through 27 degrees of Capricorn, and also on the days it turns retrograde and direct. In a reading you can get a diagram of this that’s personalized for you and shows the exact dates to watch for. It shows you which of your own planets is being triggered by Pluto and we talk about what it means for you and where in your life to look for its effects. This gives you a chance to see what’s coming and plan how to respond to it. Getting this kind of personally timed information is the main reason people consult astrologers.

How to handle your Pluto transit:

Trust your process of change.  Stop fighting it.  The war is over—it’s time to remove the corpses from the battlefield.  Yes, you will be different after this—look for the ways that is a good thing.  Let go of what you don’t really need.  What’s left will be essential and true.  Pluto’s gift is not only the rebirth of whatever he touches, but also your growing sense of deathlessness, every time he changes you by taking away what you didn’t really need.  Fly, bright butterfly, into your new life.  But don’t forget the caterpillar, because you will be that again, somewhere, someday.

If you’d like to find out whether
you’re having a Pluto transit this year,
and you want to thrive with it,
schedule a reading.

Learn about Pluto in Capricorn and other transiting planets in signs this year.
Here’s how to know if you’re having a transit this year:  Are You Currently In Transition?
Read my Frequently Asked Questions about astrology.