This Year’s Stations of Neptune

What is a “station?”
You may have heard of Mercury retrograde and wondered what that means astronomically.  “Retrograde” means “moving backwards,” so when Mercury is retrograde, it is moving backwards in apparent motion from our viewpoint here on Earth.  This means that instead of progressing forward through the zodiac, from one sign to another, Mercury is actually backing up.  It’s a visual illusion, but a meaningful and measurable one.

I call these stations “pivotal days,” because the planet we’re talking about is literally pivoting—and also because stations tend to lead to pivotal events for those of us Earthlings who are being affected by them.  Those pivotal events will trigger changes in us, and that will happen according to the nature of the transiting planet, in this case, Neptune.

How does Neptune change us?  By setting before us a new vision as a beacon of possibility.
As the Dreamer, the Artist, the Visionary, the Imaginer, Neptune re-visions, re-dreams the old into the new.  Neptune does this gently, like ocean waves lapping at the shore, softly blurring the lines between things and allowing them to merge into each other, disintegrating the old and allowing a vision of the new to arise.

Neptune is likely to paint a picture that’s rosier than the truth.  Because of this, during a Neptune transit, you may fantasize or even outright delude yourself about whatever area of your life Neptune is touching.  Beware of marrying or moving in together when Neptune is transiting your Venus, because any relationship you commit to then is likely to not take all the factors into account.  The new career direction you take when Neptune is transiting your Saturn could be a red herring trail.  Anything which seems too good to be true during a Neptune transit might well be.

This is no reason to allow your inner skeptic to rule the day.  Neptune transits are not for reality; they are for dreaming, and dreams are not the same as goals.  Goals are concrete and dreams are malleable stuff.  Goals must be infused with dreams, however (or why would we pursue them?) and therefore dreaming is important.

During a Neptune transit you may be more tired than usual, as if your inner worlds are yawning open, calling you to look within instead of without.  A Neptune transit softens you, opening up wells of sympathy, understanding and compassion within you.  It sensitizes you to subtleties you may have been ignoring or unaware of.  Your intuition is stronger during a Neptune transit, and you are reminded of the value of intangibles.  A beautiful vision can carry you through moments of despair on the long journey to making it real. 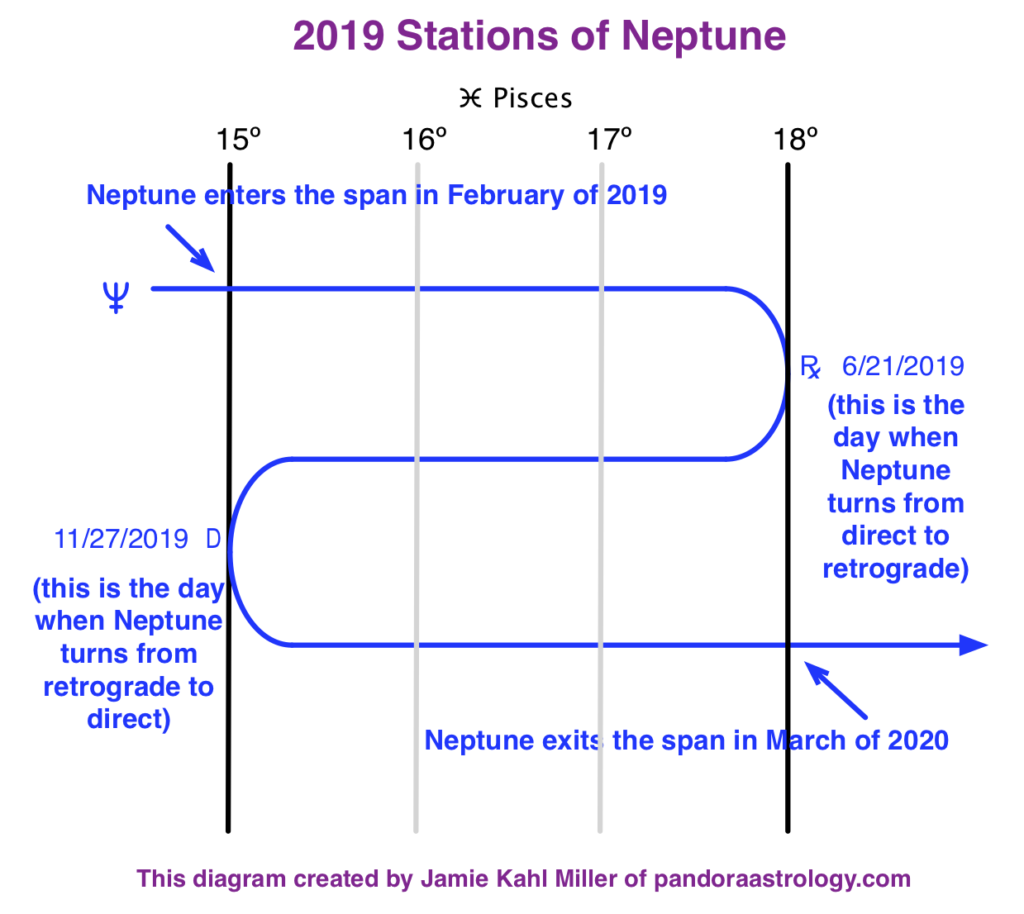 Peaks in the intensity of this transit:
You’ll feel a transit the most strongly when it’s exact and also during its stations, or pivotal days.  So if you have Mercury at 17 degrees of Gemini, you’ll feel Neptune’s influence the most strongly when Neptune is passing through 17 degrees of Pisces, and also on the days it turns retrograde and direct.  In a reading you can get a diagram of this that’s personalized for you and shows the exact dates to watch for.  It shows you which of your own planets is being triggered by Neptune and we talk about what it means for you and where in your life to look for its effects.  This gives you a chance to see what’s coming and plan how to respond to it.  Getting this kind of personally timed information is the main reason people consult astrologers.

How to handle your Neptune transit:
A Neptune transit is a great time to go on retreat because during a Neptune transit what you are supposed to do is dream.  Dream deliberately.  Dream consciously.  There never was a better time for clarifying your vision and seeking the spiritual/metaphysical meaning behind the tangible things in your life than during a Neptune transit.  There’s also no worse time for acting on it.  So get out of the world and into your imagination.  Allow your mind to open and your intuition to expand.  Ask yourself the really big questions:  “Why do I do it all?  What do I really want?  Why am I here?  Why is my life the way it is?”  Then imagine something better.  There’s no need to do anything about it right now.  Just relax and dream.

If you’d like to find out whether
you’re having a Neptune transit this year,
and you want to thrive with it,
Contact Jamie for a reading.

Read about Neptune in Pisces and other transiting planets in signs this year.
News video about Neptune Activity in June 2019: Are We Visionary Or Just Deluded?
Read about this year’s Jupiter square Neptune transit: What Could Possibly Go Wrong?
Read about this year’s Saturn sextile Neptune transit: For All Who Work and Imagine.
Here’s how to know if you’re having a transit this year:  Are You Currently In Transition?
Read my Frequently Asked Questions about astrology.