Mars is now direct, not retrograde

“A hero, properly, is one who gives his life to something greater than himself.”
-Joseph Campbell

If you know a little about the planetary archetypes in astrology, you may know that Mars is your Inner Hero. Mars is the keeper of your energy, drive, vitality, self-assertion and potency. Understanding the larger Mars cycle can help you go after what you want in life. So what happens during Mars Retrograde?

What is Mars Retrograde?

Mars Retrograde is when Mars is in the part of his cycle where he is traveling backwards from our point of view here on Earth.  When Mars goes retrograde, we are cast upon a symbolic Hero’s Journey.

A retrograde period of any planet is a slowing down and an inward reflection on that planet’s themes. It is a time of moving backward, perhaps of going back to pick up pieces lost in the past. It is a retrieval, a turning inward, a letting-go.

While Mars is retrograde, we will face many opportunities to be a hero in a deeper, truer sense than we ever have before. A Hero’s Journey is a life-passage in which we retrieve our own heroism.  True heroism involves courage, strength, assertiveness, but also gentleness and appropriate restraint—and during this journey we are tested, in a number of ways, for those things.

How Long Does Mars Retrograde Last?

Who Does Mars Retrograde Affect?

All of us, basically. However, if you have the Sun in Aries or Aries Rising, you’ll tend to feel Mars activity the most keenly. That’s because you already have a strongly martial nature.

Likewise, if you have natal Mars retrograde in your own chart, you deal with challenges regarding assertion, honesty, sexuality and self-determination. Therefore, it’s likely that an individual with natal Mars retrograde will also have a strong experience of the Mars Retrograde transit (and not necessarily a bad one!).

This Year, Mars is Retrograde in Gemini

This year, Mars is Retrograde in airy, cerebral Gemini. Gemini’s articulateness combined with Mars’ directness can add incisiveness and acerbic wit to your communications.

On the other hand, Gemini can be distractible and lead to thinking more about actions than actually taking them. Under the influence of Mars in Gemini, we might find ourselves running around doing a lot of little things without ultimately accomplishing much.

The retrograde period falls in the middle of the cycle.  Mars goes retrograde on October 30, 2022 at 25º Gemini. It then travels backwards until January 12, 2023 where it turns direct (forward) at 8º Gemini. The cycle looks like this: 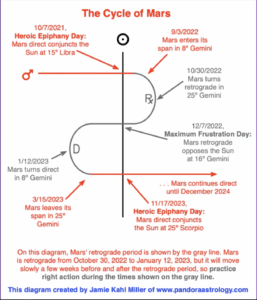 Heroic Epiphany Day: the Beginning and End of the Mars Cycle

The retrograde period of Mars is just one part of his larger two-year cycle. This cycle is marked by certain milestone days. For example, the day that Mars conjuncts the Sun is called “Heroic Epiphany Day” and marks the beginning and end of the cycle.

Heroic Epiphany Day is a peak on a wave of energy, drive, action and clarity. It’s a great time to make a strong beginning on a year-long project, or to assert yourself in a way you’ve hesitated to do before. The house in your chart where Mars is during Heroic Epiphany Day can provide a clue about where in your life you can more easily take heroic action.

Maximum Frustration Day: The Most Difficult Part of the Cycle

In the middle of its retrograde period, Mars opposes the Sun. This is the day of maximum frustration, blockage, irritation and rage during the cycle. Mars’ drive and energy meets with the ultimate obstacle. At this point, all Mars wants is to batter that wall until he rams right through it.

Mars may be long on action, but he is short on brains and tact. In other words, on Maximum Frustration Day, we are especially prone to behaving badly in frustration or anger. However, you can balance this tendency by being aware that the transit is going on and practicing mindfulness, diplomacy, and non-reactivity.

In 2022, Maximum Frustration Day is December 7 and it happens at 16º Gemini. That means that if you have any planet or point in your chart at 16º of any Mutable sign (Gemini, Virgo, Sagittarius or Pisces), you will feel this strongly—and that planet or point will tell you where.

This degree will connect with the planets in your own chart that represent the sides of you that will face the most difficult obstacles of this two-month period. For example, if Mars aspects your Saturn on Maximum Frustration Day, your career and reputation will be on the line and you will have to contain the frustration you feel in progressing with them. By contrast, if Mars aspects your Venus, you should beware of blowing up at your partner—or risk losing their affection.

Does This Mean You?

If you were born in the following date-spans (of any year), Mars will be transiting your Sun during its 2022 retrograde period:

So, if your birthday falls in any of those periods, you will feel this retrograde strongly! Therefore, you may want to pay extra attention to what you can do to make this time easier for yourself.

How To Deal With Mars Retrograde:

When Mars is retrograde, we are less coordinated and more accident prone. In addition, we are prone to expressing pent-up aggression in all the wrong ways. In order to avoid the worst potentials of Mars’ retrograde, we advise you to take the following precautions during the retrograde period:

When has this happened before?

Mars went retrograde from June 26 to August 27, 2018. During that time Mars was retrograde in Aquarius and Capricorn, and here’s what we said about it:
The Uncanny Hero: Fox Mulder’s Quest to Prove Extra-Terrestrial Life

Before that, Mars went retrograde from April 17 to June 30, 2016. During that time Mars was retrograde in Sagittarius in Scorpio, and here’s what we said about it:
Mars Rx 2016 in Sagittarius and Scorpio–Star Wars, the Hero’s Loss of Innocence and the Encounter with Evil

We made our original series of blogposts on Mars Retrograde when Mars went retrograde from December 29, 2009 through March 10, 2010. During that time we blogged about stories of famous heroes and how they might lend meaning to the Mars retrograde period.  Here is that post-thread:
Mars Retrograde—The Hero’s Journey

Finding out about Mars in YOUR chart:

Use the clear, easy instructions in this blogpost on how to cast your own chart online and find out where Mars is in your chart.

If you want to go straight for the gold and explore Mars is in a reading with a dedicated professional, you can find out more about that on our services page.