This Year’s Stations of Jupiter

What is a “station?”
You may have heard of Mercury retrograde and wondered what that means astronomically.  “Retrograde” means “moving backwards,” so when Mercury is retrograde, it is moving backwards in apparent motion from our viewpoint here on Earth.  This means that instead of progressing forward through the zodiac, from one sign to another, Mercury is actually backing up.  It’s a visual illusion, but a meaningful and measurable one.

I call these stations “pivotal days,” because the planet we’re talking about is literally pivoting—and also because stations tend to lead to pivotal events for those of us Earthlings who are being affected by them.  Those pivotal events will trigger changes in us, and that will happen according to the nature of the transiting planet, in this case, Jupiter.

How does Jupiter change us?  By bringing a period of growth, expansion, confidence and even luck.
A transit of Jupiter brings the spirit of adventure, a readiness for growth and expansion, and the sensation of endless possibilities and wide-open horizons.  During a Jupiter transit you feel open to new directions and you want to grow.  This transit fills you with self-confidence—you feel and believe in your own competency.  This self-confidence rolls right off you and inspires those around you.  Leadership and “star power” come to you more easily during a Jupiter transit, and so does sheer luck.

This may all sound like good stuff (and it is), but Jupiter also magnifies and if you are already confident, then Jupiter can fill you up with overconfidence till you’re “too big for your britches.”  Jupiter can also blow things out of proportion.  Everything gets bigger, which sometimes allows you to see where the problems are—and then if you open up to growth, you can turn even a bad situation into a good one.

You will notice growth in the area of life ruled by whatever planet of yours that Jupiter is transiting.  For example, Jupiter transiting your Mercury might open you up to intellectual growth and expansion beyond the usual ideas that occupy your mind.  Jupiter transiting your Juno can bring a spirit of adventure to your relationship—or cause you to want to have adventures outside your relationship.  Jupiter’s passages through the Earthy Houses in your chart (the Second, House of Money; the Sixth, House of Work and the Tenth, House of Career) bring wonderful career and money luck periods that are great to know about before they happen—so you can maximize your luck and ask for that raise or look for a new job in the time when it can come to you the most easily. 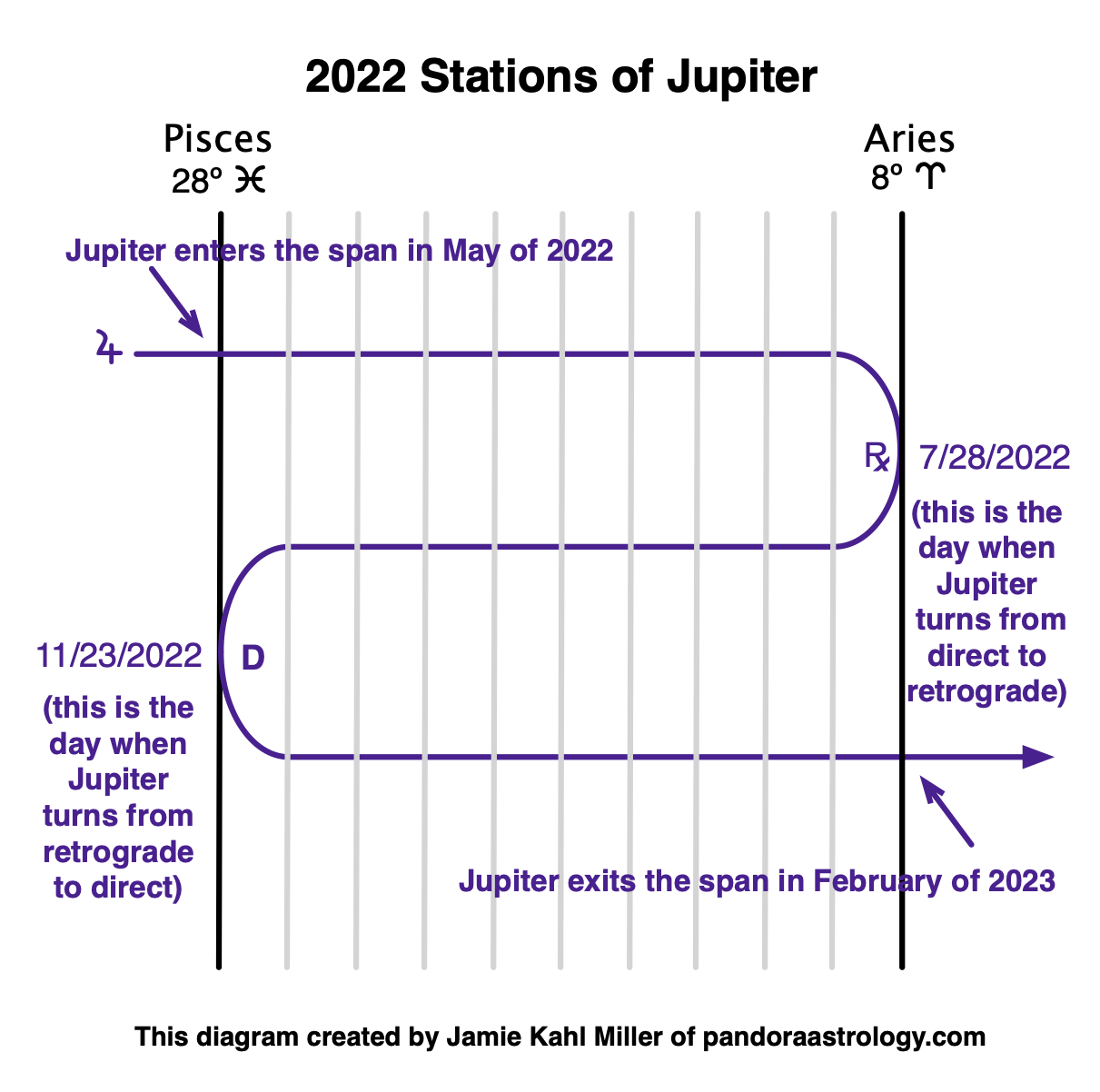 Peaks in the intensity of this transit:
You’ll feel a transit the most strongly when it’s exact and also during its stations, or pivotal days. So if you have Venus at 2 degrees of Cancer, you’ll feel Jupiter’s influence the most strongly when Jupiter is passing through 2 degrees of Aries, and also on the days it turns retrograde and direct. In a reading you can get a diagram of this that’s personalized for you and shows the exact dates to watch for. It shows you which of your own planets is being triggered by Jupiter and we talk about what it means for you and where in your life to look for its effects. This gives you a chance to see what’s coming and plan how to respond to it. Getting this kind of personally timed information is the main reason people consult astrologers.

How to handle your Jupiter transit:
During a Jupiter transit you can attract more lucky circumstances faster if you are aware of where your luck is.  Focus maximal positive energy into that area.  Be ready to grow, be open to possibilities, and allow good things to come to you from directions you don’t expect.  Also focus on hope and appreciation for how good your life already is.  And try my principles of how to be a lucky Sagittarian.  Then claim the good things that come to you—and thank Jupiter for sending them.

If you’d like to find out whether
you’re having a Jupiter transit this year,
and you want to thrive with it,
Contact Jamie for a reading.

Check out this video about Jupiter in Pisces this year.
Learn about the big picture of transiting planets in signs this year.
Is Jupiter Your Good Fairy?
Here’s how to know if you’re having a transit this year:  Are You Currently In Transition?
Read my Frequently Asked Questions about astrology.