The Federal Reserve Bank has been having a hell of a time since the beginning of 2008.  This is reflected in its astrology chart.  Pluto in the sky has come opposite its position in the Fed’s chart.  This is something that few human beings get to experience in their lifetime but which the Fed gets to experience because it’s over a hundred years old.

Every entity that comes into existence has a chart and the Fed is no exception.  I’m no expert in mundane astrology (that’s the branch devoted to world events, politics and the charts of leaders and nations) but the Fed fascinates me, so I thought I’d apply what I do know—which is the astrology of individual personality—to the Fed.  So what happens when I read the chart of the Fed as if it were a person?  It might go something like this:

Me:  Hello, Fed, how ya doing?
Fed:  Not so good in the last few years.  In fact, I feel like I’m in meltdown.
Me:  Yeah, I can understand why.  You are experiencing an opposition of Pluto to your natal Pluto.  And because your natal Pluto was already opposite your Sun, that means the transiting Pluto is conjuncting your Sun.  See? 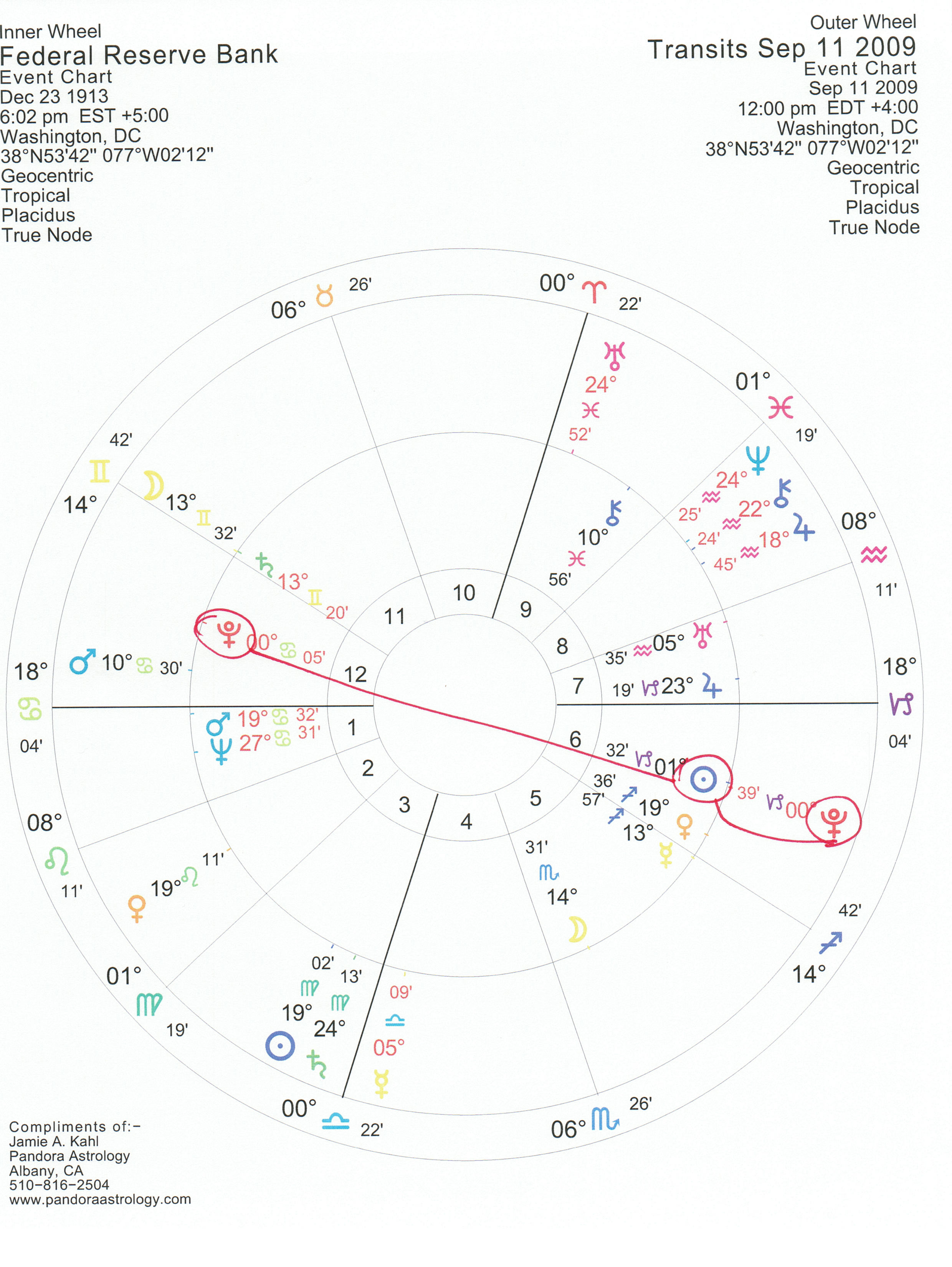 Fed:  Not really, but go on.  What does it mean?
Me:  It’s a time for you to metamorphose into something better, from the core outward.  During this time you’re likely to feel a sense of uncertainty about who you are and why you’re here.  You’ll feel lost in the dark, out of control, a ship at sea without a compass.  During a time like this, your secrets are likely to come to the surface and be seen by everyone.  You’ll feel exposed and vulnerable.  You’ll be forced to let go of things that seemed essential but really are not.  It’s a time of death and rebirth, a time of shedding your skin.  The caterpillar you were is becoming the butterfly you could be.
Fed:  But what if I turn into something completely different?
Me:  You’d best be open to that possibility.  Your past ways of maintaining control are up for change and this is a time of testing for you.  What can you let go of and how gracefully can you do it?
Fed:  That sounds like a lot of work.  I’m pretty complex and change is hard.  What happens if I don’t want to change?
Me:  If you’re not willing to let go of the old ways and trust what you are becoming, this could be a pretty painful process.  Your natal Pluto is in Cancer, which is about emotional ties and the ways they can be used to control and manipulate.  Pluto in the sky today is in Capricorn, and he has a message for you.  He’s asking you to let go of inappropriate codependency and to instead embrace independence.
Fed:  What does that mean?
Me:  I’m saying that your dependence on the government to bail out the banks is not going to fly anymore.  You’re getting the whole nation deeper in debt—to ourselves and other nations—with your monetary policies which were created in the first place by wealthy people who wanted to stay wealthy at the expense of the common man.  It’s just not sustainable.
Fed:  But it’s worked this long.  And I resent your implication that I exist to prop up the rich!  This is America and wealth is available to anyone who wants to work for it.
Me:  Has it really worked?  Are these boom-and-bust cycles symptomatic of a healthy monetary system?  You keep overextending yourself in ways my financial advisor would tell me not to.  The FDIC has propped you up, but how much longer can that continue?
Fed:  But the nation’s economic structures depend on my health.  I need those periodic  infusions of money to keep going.
Me:  Exactly my point.  This Pluto thing you’re experiencing is showing you the ways you’ve become codependent and unable to stand on your own two feet.  Many of your banks have failed this year.  You need restructuring at least, perhaps even replacing.
Fed:  But I don’t want to die!
Me:  Maybe, if you’re willing to be flexible and start serving the actual needs of the people, instead of the comfort of a few, you can change instead of dying.
Fed:  This is scary.
Me:  Fortunately for you, your transition is mostly over.  What’s happening this month is just a small aftershock of events associated with your Pluto transit, which happened from January through November of 2008.
Fed:  Whew!  So, no worries?
Me:  Actually, yes-worries.  Pluto will make one more pass conjunct your Sun.  That will peak around November 10th or 11th this year.  October and November will likely be very challenging for you.  Sometimes illumination of a current transit comes when we look at the previous milestone in its larger cycle.  The last time Pluto transited your Sun and Pluto was in 1971.  You remember what happened then, don’t you?
Fed:  Um, what?
Me:  Nixon took the dollar off the gold standard.  Without gold as an anchor, inflation went through the roof.  You’ve been trying to keep your balance ever since, without an anchor.
Fed:  What can I do?
Me:  Learn from it.  Actually change.  From now through November is the chance to make it better, not worse.  Are you up for that?  Are you willing to see the truth of it if your monetary policies are just not standing the test of time?  Are you willing to try what does work, instead of making adjustments to keep bad policies in place?
Fed:  I honestly don’t know.
Me:  I guess we’ll see, won’t we?

The Fed didn’t like this news very much.  Somehow I get the idea that the Fed is not very personal-growth oriented.  The good news is that when things get bad enough to grab attention, that’s when change can begin.  The Fed is unwell—perhaps the events of 2008 and 2009 are exactly what is needed to bring this country back to financial health.

Note: I had to remove two of the links above, because the articles they point to no longer exist. Sadly.