Scorpio: The Spy Who Loved Me (5 Ways Scorpio Is Like James Bond) 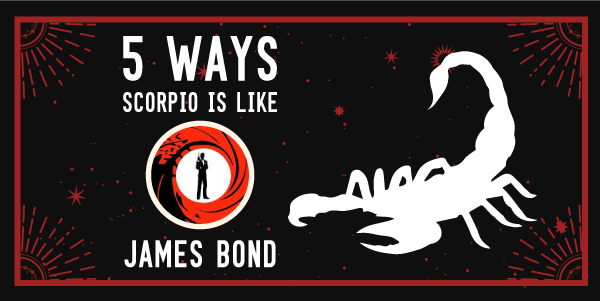 There’s a new James Bond movie coming out next week (No Time To Die), which reminds me how very much James Bond exemplifies the nature of the sign Scorpio.

In what ways does Scorpio resemble James Bond?  Here are 5 ways Scorpio is like James Bond…

1. Scorpio, like Bond, has a reputation for being sexy

Especially in the older movies, Bond is a seducer, a womanizer who can control others—or be controlled by others—via sexual passion.  But even in the newer movies, which have stronger women characters in them, Bond radiates masculine magnetism.  An emphasis on Scorpio in a person’s chart can cause them to radiate sexuality in a similar way.  Hopefully most individuals are more intimate in their sexual expression than Bond is.

2. Scorpio is also highly intuitive, sometimes in ways that are startling

Scorpio’s brand of intuition is sharp, incisive and not easily tracked.  Bond, like Scorpio, has a particular talent for reading the motivations and desires of the people around him.  Scorpio has the instincts of a spy, a person who must always be hyper-aware of his surroundings and the possible presence or actions of the enemy.  If this sounds like paranoia, that’s because it sometimes is—to the detriment of Scorpio individuals who become overly preoccupied with the responses of other people, even to the point of obsession.

3. Scorpio, like James Bond, has passions that run very hot and very cold, with not a lot in between

I’m reminded of Billy Joel’s lyrics: “darling, I don’t know why I go to extremes.  Too high and too low, there ain’t no in between.”  Joel is an honorary Scorpio, having Pluto (Scorpio’s ruler) squared his Taurus Sun.  And if he doesn’t know why he goes to extremes, it’s probably because no astrologer ever told him to read the Scorpio chapter in addition to the Taurus one.

4. Scorpio can be sneaky, secretive and private

That also goes along with being a spy.  In fact, the Scorpio in us sometimes likes being sneaky for its own sake, purely because it’s fun.  And sometimes just because we feel we have something to hide or protect.

5. Scorpio, like Bond, we suspect is soft on the inside, but hard on the outside

This is part of the fascination.  When we see hints of vulnerability or emotion behind that armored exterior, we are intrigued.  We want to know more.  This is why Scorpio is so seductive.

But what is actually going on behind these rumored traits?  What is behind the spy’s mask?  What is it like to be Scorpio?  More on this in my next post.