Saturn Trine Uranus: Revolutions That Stand The Test Of Time

This year, Saturn enters into a trine with Uranus, which lasts most of the year and spans 20 to 26º of Fire signs, affecting those with planets in Sagittarius, Aries and Leo everywhere. Uranus is the Revolutionary while Saturn is the Traditionalist. The trine is a harmonious aspect, suggesting that these two very dissimilar characters will be able to get along and share power smoothly. But how? The story below describes one way it could go, but first, how will you know if this even matters to you?

If you were born within the following dates, you will feel this transit strongly:
December 11 through 18 of any year
April 9 through 16 of any year
August 12 through 19 of any year

This post may seem like a statement about world events, but it’s also a metaphor for events inside all us human beings. This post is for you if. . .

How the Saturn square Neptune works
(this part is technical, but brief)

The connection between Saturn and Uranus is strongest when it’s exact and there are 3 days this year when that happens. I’ll show you images of these connections below but first, please know that if one of those days happens to be your birthday or within a few days on either side of it, then Saturn and Uranus will have powerful lessons expressly for you in this birthday year. A reading of your birthday chart (called a Solar Return) can help you discover what it means for your year and how to use it to the fullest capacity. These are the dates of the exact Saturn-Uranus connections this year: December 24, 2016, May 18, 2017 and November 11, 2017.

The first pass happens on December 24, 2016, while Saturn is direct at 20º Sagittarius and Uranus is retrograde (moving backwards) at 20º Aries. If you have anything in 20º of a Fire sign–like your Sun, Moon or Ascendant, and so on—you will feel this (see diagram for pass 1). 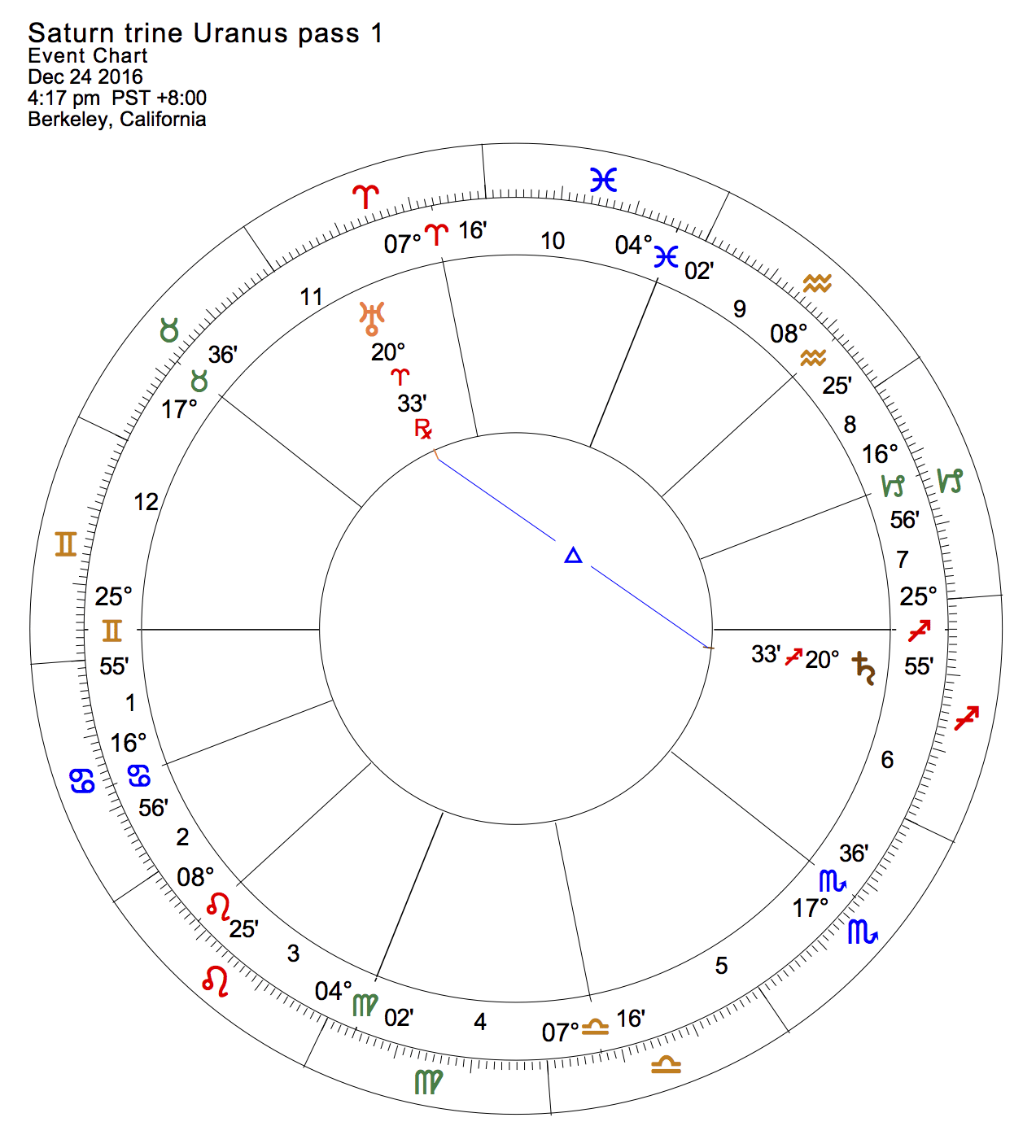 The second pass happens on May 18, 2017, while Saturn is retrograde at 26º Sagittarius and Uranus is direct at 26º Aries. If you have anything in 26º of Sagittarius, Aries, or Leo, you will feel this (see diagram for pass 2). 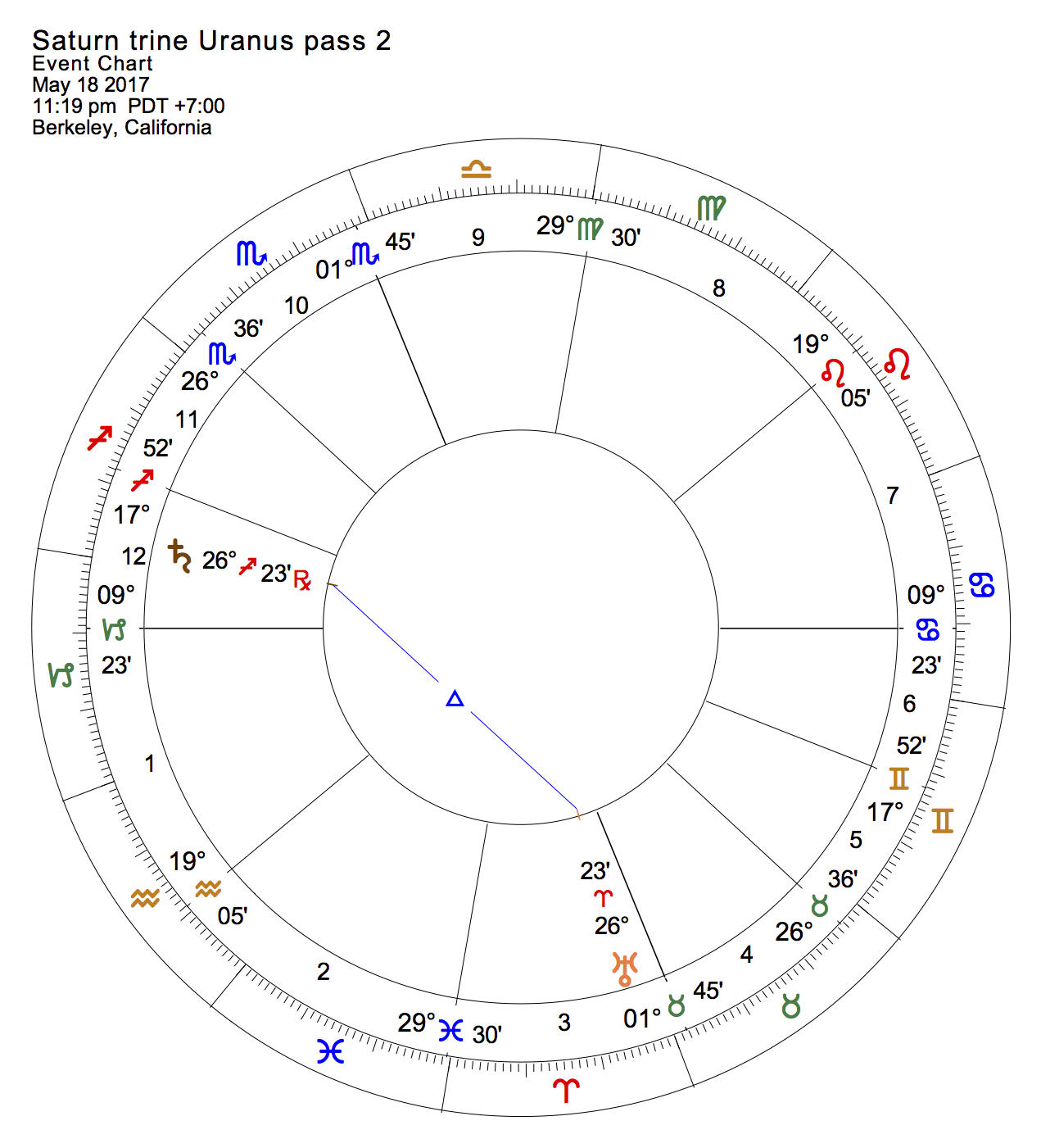 The third pass is where this transit ends, on November 11, 2017, with Saturn direct at 25º Sagittarius while Uranus is still retrograde in 25º Aries. This will affect you if you have anything in 25º of Sagittarius, Aries or Leo (see diagram for pass 3). 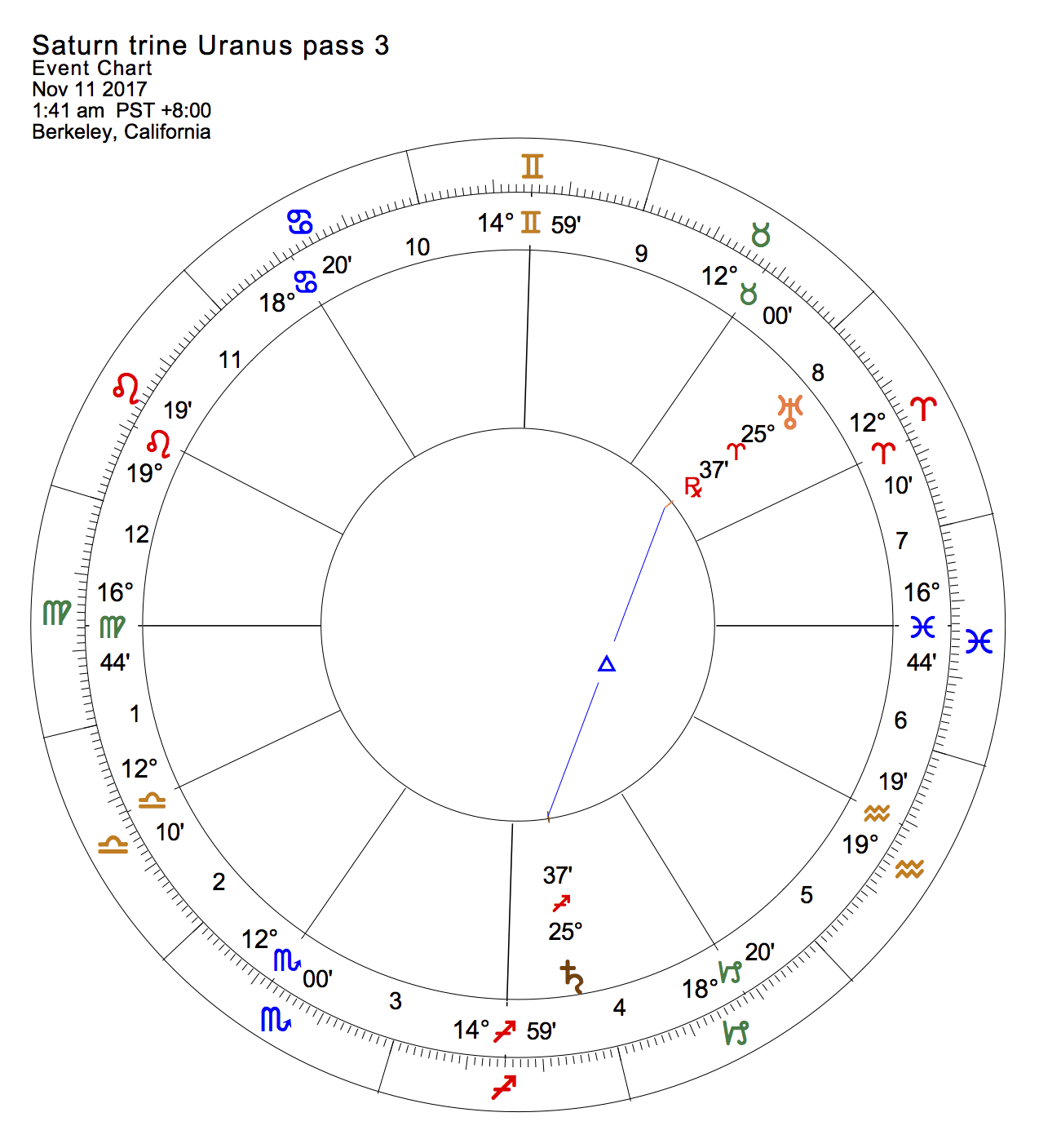 There was once a young man named Saturn in Sagittarius who grew up on a wealthy sugar cane farm on a small island nation. His father owned the farm, though the son did not wish to inherit the business from his father when he grew up. When he was old enough to leave home, he went to University, where Saturn in Sagittarius studied law, and hoped to use his degree to help the underdogs of society.

When he was studying at the University Library, buried underneath old tomes full of legal cases, he ran into a fellow student who was known for her extreme politics. Her name was Uranus in Aries, and she was the most spontaneous, incendiary, opinionated, and hell-bent person he had ever met.

“Why are you studying law?” she scoffed at Saturn in Sagittarius.

Saturn spent weeks and even months mulling over what she had said. Uranus had completely shifted the perspective that he’d spent years of his life working inside of. But she had that affect on people.

Saturn in Sagittarius then decided to put his money where his mouth was. He left school and became a revolutionary, joining forces with Uranus in Aries to fight the colonial oppressors. During this time, Saturn in Sagittarius stopped getting letters from his father. He took this as a withdrawal of his father’s approval. Some days, he could almost hear his father’s disapproving voice in his head, judging his ‘power to the people’ ideology. But he kept on working to change the system.

While Saturn and Uranus were working hard ousting colonial land owners, Saturn realized that removing a corrupt power was not enough to sustain the effects of their revolutionary effort, since another colonialist oppressor could take their place.

“We need to find a better system,” said Saturn in Sagittarius.

“How?” asked Uranus in Aries, as she was running paces around Saturn at lightening speed. She had a hard time using up all her energy on a daily basis.

“I’ll go travel the world to see what other cultures do,” he replied. Uranus in Aries stopped so suddenly that smoke emanated from the floorboards underneath her feet. “But you are TERRIFIED of travel! In fact, you’ve never left this island nation in your WHOLE LIFE.”

“Your right, I’m terrified. But I’m more terrified of what will happen to our revolution if I do not go.” He left the island the next day on a large ocean liner. It was indeed a terrifying experience for Saturn. His heart raced faster and faster as the ship pulled further and further away from his homeland.

Ten months later, Saturn in Sagittarius returned to the island. Uranus in Aries raced up to the ship to greet him.

“So tell me, tell me, tell me… what are we going to do?” she asked him impatiently. Saturn in Sagittarius smiled confidently. “I think I know what we should try,” he said in his understated way.

The next day, Saturn visited his father’s plantation. Now, Saturn in Sagittarius had been facing a lot of his own fears lately, but facing his father was by far the most terrifying thing of all. When he arrived, he saw his father wearing a Hawaiian print shirt and drinking a piña colada. “Hello Son,” said his father. “I’ve been trying to contact you for the past six months or so… where have you been?”

“I’ve been abroad,” replied Saturn, who had a hard time not shaking in fear. His father did look a lot more relaxed than usual though…

“I wanted to let you know that I retired a few months ago! I want to enjoy my twilight years in peace. This plantation is all yours now. You can do whatever you want – I just want to be able to sit on the porch and drink piña coladas. I’ve discovered that I really like them and after so many years of working so hard, I’m really tired.”

Saturn in Sagittarius couldn’t believe his ears. The plantation was his to organize, exactly as he saw fit! He grabbed his phone and shot a quick text message to Uranus, inviting her to visit.

So just as his father asked, Saturn in Sagittarius took over the plantation, and let his elderly father wear as many hideous Hawaiian shirts as he pleased, while he rocked back and forth on the porch imbibing neon mixed drinks. Saturn in Sagittarius then changed the slave-run plantation into a worker’s coop. He had visited a number of these business models while he was abroad, and believed that this would be the solution that would sustain their revolution.

The workers were freed that day and allowed to own their own land. And that day was forever remembered as a day of liberation, when the old transitioned peacefully into the new.