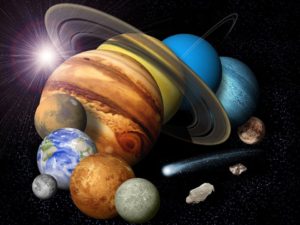 In your natal astrology chart, the planets are like characters in the grand drama of your life. They are parts of you, like voices within, each with a gift to bring you and each may be more or less challenged by its position within your chart as a whole. It may be hard for some of your planets to bestow their gifts while for others it is easy. These differences account for much of the differences between temperaments in individuals.

When these planets are transiting, they bring change into your life, each according to its own nature. The faster-moving planets (including the Sun, Moon and everything from Mercury out through Mars and the asteroid belt) are not especially useful for understanding transits, because they move so quickly that the changes they bring occur mostly as ephemeral moods. The slower planets (Jupiter through Pluto) bring very powerful long-term changes into our lives.

Read more about the planets below and follow their links to read blogposts about sky events they are active in.

The Moon represents emotions and mood. In a natal chart, the placement of the Moon describes what you need to feel safe, secure and well-taken-care-of. It also describes the kind of home life you need and speaks to your mothering/nurturing style. The transiting Moon moves very quickly and describes quickly passing moods in an overall lunation cycle lasting about 29 days. Full and New Moons are times of heightened emotion, and I describe the current ones in my monthly Forecast page. Eclipses are special New and Full Moons that happen in clusters of one to three every six months. They lead to powerful emotional experiences; you can read my blogposts about this year’s eclipses here.
Read more about the Moon here.

The Sun represents identity and ego formation. In a natal chart, the placement of the Sun describes how you discover yourself, individuate and become more you. In transits, the Sun returns to the place it was when you were born every year around your birthday. This is your Solar Return, which generates a birthday chart, describing the themes of the year to come. Your yearly cycle runs in seasons, where your birthday is parallel to the spring equinox. In a Birthday Reading you can learn about what that means for you, as well as getting a recording all about your Personal Year and your Sun sign.
Read more about the Sun here.

Mercury, named after the Roman messenger of the gods, represents communication. In a natal chart, the placement of Mercury describes your thinking, learning and communication styles. Mercury also governs office work, office machinery and messages of all kinds—which can make Mercury Retrograde periods challenging for anyone who works in an office or runs a business. Mercury goes retrograde about once every four months and stays retrograde for about three weeks. Understanding Mercury’s rhythm can help office workers, manufacturers, business owners and writers tremendously.
Read more about Mercury here.

And if you’re wondering, “what the heck does ‘retrograde’ mean anyway?” you can check this out.

Venus, named after the Roman goddess of love, represents romance and beauty. In a natal chart, the placement of Venus describes how you love and who you love and how relationships go for you in general. Venus goes retrograde about every year and a half or two, and stays retrograde for approximately six weeks, during which everyone’s relationship gets a real workout. Read about the last or current Venus Retrograde period here.
Read more about Venus here.

Ceres, named after the Roman goddess of agriculture, represents survival and abundance. In a natal chart, the placement of Ceres describes your relationship to food, money and your own physical body.

Pallas-Athene, named after the Roman warrior goddess of wisdom, represents the modern woman’s dual dilemma—“should I be strong or soft?” In a natal chart, the placement of Pallas-Athene describes where you need autonomy and the expression of your wisdom. She is also the archetype of the Father’s Daughter.

Juno, named after the Roman goddess of marriage, represents committed relationships. In a natal chart, the placement of Juno describes your best partner for committed relationship and how marriage goes for you. Juno’s natal position may be very different from Venus’, showing that your marrying style and your romantic style may not be in natural alignment—which can explain your relationship woes. Resolving those differences can result in a relationship that really works for you.
Read more about Juno here.

Vesta, named after the Roman goddess of the hearthfires, is the Temple Priestess. Her core theme is focus and her natal placement describes what you need in order to be able to best focus your energies. Individuals with a strong Vesta also have a tendency to be natural sexual healers, having many relationships during their lifetimes.

Jupiter, named after the Roman king of the gods, represents growth, luck, and optimism. In a natal chart, the placement of Jupiter describes the kinds of experiences that will lead to personal growth and bring you joy. Jupiter’s transits bring periods of growth, leadership, luck and even charisma. Jupiter has an orbital period of 12 years, so it returns to its natal position at ages 12, 24, 36, 48, 60, and so on.
Read more about Jupiter here.

Saturn, named after the Roman god of the Capitol, represents career, structure and self-discipline. In a natal chart, the placement of Saturn describes the goal of your life’s work, along with instructions on how to go about achieving it. Saturn’s transits bring a reality check and a time of testing. Saturn has an orbital period of 29 years, so in 29 years Saturn travels the whole zodiac and ends by returning to where it was when you were born—thus the famous “Saturn Return,” which you may have heard of. The Saturn Return is the reason most cultures view age 30 as a threshold of true adulthood. Saturn returns again at 58, threshold of the elder years.
Read more about Saturn here.

Chiron, named after the first centaur in Roman mythology, represents pain and healing. In a natal chart, the placement of Chiron describes where you are most wounded, and also where you bring healing to others. This primal wound is a source of soul evolution for you. Chiron’s transits bring times of accelerated healing, which are often accompanied by the resurgence of old pain. Chiron is also the bridge-builder and integrator. Chiron has an orbital period of 50 years, so it returns at age 50, making that year a time of old wounds surfacing, with the possibility of healing them—for good.
Read more about Chiron here.

Uranus, named after the Roman god of the sky, represents your genius, your individuality and your sense of tribe. In a natal chart, the placement of Uranus shows where rebellion may surface in your personality—and where you foment change in yourself as an individual and in society as well. Uranus’ transits bring the breakdowns and chaos that can lead to a new order, a breakthrough or a paradigm shift. Uranus has an orbital period of 84 years and brings a period of rebellion and shift lasting about a year once every 21 years.
Read more about Uranus here.

Neptune, named after the Roman god of the sea, represents spirituality and oceanic consciousness. In a natal chart, the Neptune the Visionary describes the dream of your generation and how you connect to that. If Neptune is strong in your chart, you’re probably an artist of some kind. Neptune transits bring times of confusion and hypersensitivity when you are supposed to retreat and reflect, but not take action—beware of acting on illusions during Neptune transits. Neptune’s cycle is 165 years long, which may mean that it takes 165 years to fully understand Neptune’s lessons. Right now, humans don’t live that long—but wouldn’t it be interesting if we did?
Read more about Neptune here.

Pluto, named after the Roman god of the underworld, represents death and regeneration. In a natal chart, the placement of Pluto indicates areas where we greatly want control but never feel we have it. We need to learn to let go in these areas and Pluto brings us death and rebirth there to teach us that. People with a strong natal Pluto often must grapple with addictions at some point in their lifetime. Pluto’s transits bring times of profound change where surrender to a greater mission is necessary. Often there is a “long, dark night of the soul” during Pluto transits. Pluto is active during midlife and is partially responsible for the human “midlife crisis.” Pluto has an orbital period of 248 years—suggesting that its themes are far too deep for us to fully comprehend in our brief lives.
Read more about Pluto here.

Take a moment to watch our Horoscope videos.