Neptune and the Generational Dream 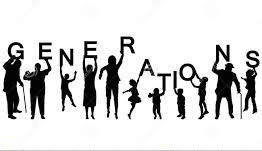 Neptune in an astrology chart represents the Dreamer, the Visionary, the Artist in all of us. Neptune takes 14 years to pass through each sign of the zodiac, gathering all individuals born in that time period* under the banner of a shared dream, a vision of otherworldly magnificence and beauty. Pisceans of each generation are particularly captivated by their generational dream. Here are the generational dreams and dates of people alive today:

Neptune in Virgo:
Neptune entered Virgo in the end of 1928, returned to Leo briefly in the spring of 1929, then moved into Virgo to stay in July 1929. Neptune in Virgo natives share a practical dream of efficiency and prudence. It’s no accident that these are the Depression babies, born into a time of scarcity, following a time of (Leonine) excess. Hardworking, frugal, they are also sometimes called “The Silent Generation.”

Neptune in Libra:
Neptune left Virgo for Libra in October of 1942. It slipped back into Virgo briefly in April of 1943, then returned to dwell in Libra in August of that year. Neptune in Libra is a beautiful dream of love, connectedness and world peace. This is the Baby Boomer generation, the hippie flower children who came of age in the 1960’s, who burned their draft cards and said, “Give peace a chance.”

Neptune in Scorpio:
This is my own generation, born as early as December 1955, (with a break while Neptune slipped back into Libra in March-October 1956) and proceeding through most of the sixties. I like to say this generation’s dream isn’t so much a beautiful dream as it is a beautiful nightmare of intimacy and intensity. Called Generation X, (almost as if to say, “after those Baby Boomers we have to name these kids something—but what??”) this group’s dream is intimate connection, no matter into what dark places it may lead us.

Neptune in Sagittarius:
In November 1970, Neptune entered Sagittarius, birthing individuals whose vision is an expanding dream of global unity and world connectedness. This is a generation of ramblers, travelers, wanderers and world citizens, asking “Why can’t we all get along on this blue and green marble called Earth?” Called Gen Y, this generation is a small one, but deserves a better name than Y. This generation invented the Gap year (when you travel for a year between high school and college).

Neptune in Capricorn:
Neptune first flirted with Capricorn in January of 1984, but returned to Sagittarius briefly from June to November, moving into Cap for real in late November 1984. I like to call this generation’s dream “A dream of empires.” It’s a serious dream of effectiveness and authority. This generation has been dubbed “the Millennials” by William Strauss and Neil Howe—and they can’t wait to take charge.

Neptune in Aquarius:
Neptune left Capricorn for Aquarius in the last few days of January 1998, returning for a brief stint in Cap from late August 1998 through most of November that year. By December 1988, Neptune’s journey through Aquarius was well underway. This generation are children and teens now and theirs is futuristic dream of progress and technological advancement. I like to call them “the Tech Generation.”

* I live in the USA, so my understanding of generations occurs in that cultural context.