Gemini, Your God Is A Messenger 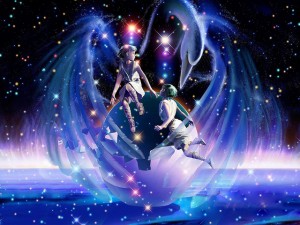 The Messenger God
The Mutable Air sign Gemini is ruled by Mercury, messenger of the gods.  Mercury’s nickname was Quicksilver, which is what we sometimes call the metal mercury.  If you’ve ever broken a thermometer and held a ball of mercury in your palm, you have experienced the mutability of Gemini—mercury is the only metal that is liquid at room temperature.  It is as impossible to grasp, hold and contain as Geminis themselves.  If you’ve ever dated a Gemini and become frustrated at their sheer evasiveness, believe me, it’s nothing to the frustration Geminis experience at their own selves.

The mythological Mercury had wings on his shoes and his hat, and carried a winged staff called a caduceus, which was wrapped with two serpents.  The caduceus has been adopted by the medical profession as a symbol (Mercury has historically been associated with medicine), and you can see a stylized version of it in the logo of the American Medical Association.

Mercury needed all the wings he could get because, as Olympian messenger, he was able to go to all 3 realms: heaven, earth and the underworld.  He could hang out on Olympus with the other gods, roam the earth disguised as a mortal, and he was the only being (besides Pluto himself) who could travel freely to and from the underworld.

Mercury As Psychopompos Or Guide To The Underworld
The underworld was the domain belonging to Pluto (Hades to the Greeks) and was a realm forbidden to all other beings, both earthly and divine.  To go there, you had to die, but not so for Mercury.  He often served as an official escort, assisting mortals and gods to return from the underworld once they had entered the land of the dead.  Examples of this include Orpheus’ attempted rescue of his beloved wife Eurydice and the descent of Inanna, the Mesopotamian Venus, to restore her dead love, both situations involving the messenger god in a critical role as helper/escort.  This role of Mercury as psychopompos (or as the OED puts it, “guide of the soul”) symbolizes the ability of the human mind to mediate between the physical world of our bodies and senses and the inner worlds of emotions and the collective unconscious.  I think individuals with Mercury retrograde in their natal charts have a special gift for guiding others on their inner journeys, perhaps from having so much familiarity with their own inner journeys.

The mind thus bridges three realms, transporting both the unknown mysteries of our darkest psychic corners and also the divine inspirations and aspirations of the ideal (Mt. Olympus) to earth, and making them relevant in the world of the everyday and mundane.  Did Mercury have a realm of his own?  Not that I know of.  It seems to me he just belonged wherever he was.

The Flexible Mind, a Mass of Messages
Mythology is deeply symbolic and the stories that have taken shape around Mercury symbolize the human experience of our own brain.  The ancients knew through their stories about Mercury that the human mind is nothing but a messenger service for carrying communications inside our bodies.  They also understood that the human mind has a marvelous capacity to deal with life on 3 levels: heavenly, earthly and underworldly.  Without the benefit of science or proof, their understanding was metaphorical but it served to give them all they needed to know about the mind, how it works and what it is capable of, allowing them to generate knowledge we still value today.

What Does This Mean About Gemini?
Geminis are pulled in many directions at once.  They need to keep moving.  They are mentally agile and quick.  Their minds go with equal facility from higher thought to lower thought.  They enjoy this duality and use polarity to understand a thing by contrasting it with its opposite.  This flexibility, this mutability and the need to keep the message moving is the heart of Gemini’s nature.  When a Gemini learns new information and passes it on to someone else, a winged god flying swiftly somewhere pauses to smile.