From June 26 to August 27, 2018, Mars will be retrograde, meaning that it will appear to go backwards in the sky, then it will appear to slow down and stop, and then move forward again. What does this mean for us?

Mars is the archetypal hero of the zodiac. When Mars turns retrograde, the Hero in all of us goes on a symbolic journey to discover what it really means to be a hero and how to take heroic action in our lives. The sign or signs Mars travels through will tell us much about the nature of the journey, while any planets Mars encounters along the way will bring experiences or characters that shape the hero’s development.

Here’s the chart of the moment when Mars turns retrograde: 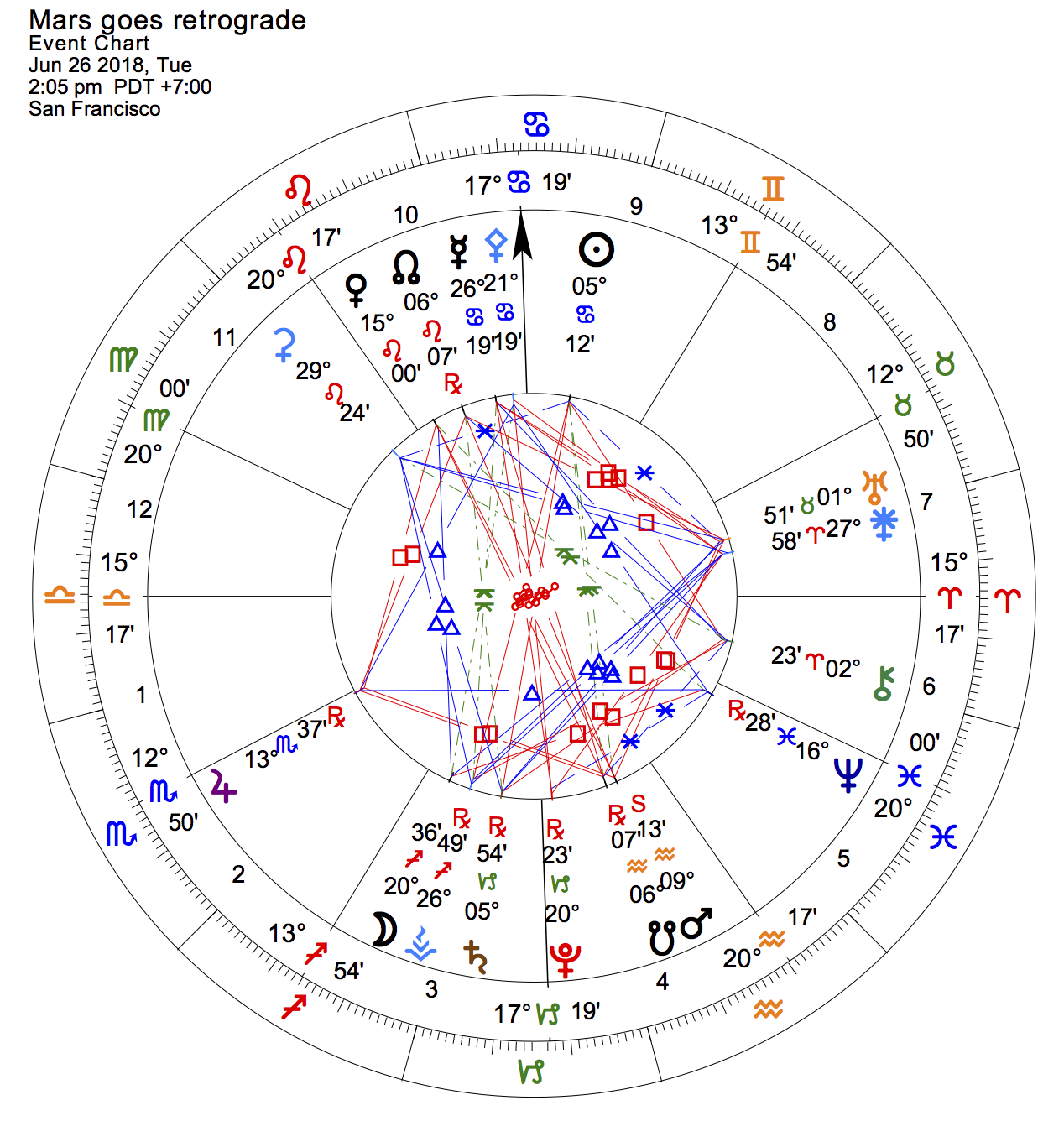 In it, we’ll find inspiration and insight, along with clues about how to navigate this Mars retrograde period. To illustrate the feel and flow of this transit, I’ll draw on a modern myth you’ve probably heard of. But first, the technical stuff. . .

What’s happening to Mars as it travels retrograde this year?
This year Mars begins its retrograde journey at 9º of Aquarius and travels back to 28º of Capricorn, where it once again turns direct on August 27th and begins moving forward again. As the warrior planet travels backwards in the sky, it will conjunct the South Node, then form a sextile to Chiron, then a square to Uranus. After Mars turns direct, it makes all those connections again, in reverse order. Mars dips its toe back into the previous sign of Capricorn to the last couple of degrees. Then Mars stations, pivots, leaves Capricorn and returns to Aquarius. So Mars will spend most of this retrograde journey in Aquarius, with only a brief return to the very end of Capricorn.

Mars in Aquarius and Capricorn
The position of Mars in the quirky, eccentric sign of Aquarius, combined with the fact that Mars is transiting Uranus during this cycle suggested I needed a modern hero to exemplify this transit—a real eccentric. So I decided to borrow a story from a TV series which has infiltrated the American imagination and earned its place in the lore of science fiction: the X Files.

When Mars transits Aquarius, the most unconventional sign in the zodiac, you can bet there will be rebellious, original and progressive action and opportunities to serve humanity at large. The innovative power of Aquarius contrasts strongly with the conservative and orderly sign of Capricorn, which strives to maintain the status quo and follow the rules. Capricorn is averse to new ideas while Aquarius is brimming with them. But Mars in Capricorn, the sign of its exaltation, is an effective and rigorous place for Mars, and its backwards motion in these final degrees helps it revisit the Capricorn skill sets once more, so that Mars can proceed forward in Aquarius with a stronger foundation. A story that begins with Aquarius and finishes with a return to Capricorn would suggest an attempt to make progress or break new ground, necessitating a return to conventional ways and a bowing to tradition before progress can be actualized.

An unconventional hero for an unconventional Mars transit
“The X Files” is a saga which has earned an honored place in our modern mythology and its narrative comes to mind as an illustration of Mars traversing between Aquarius and Capricorn. Warning: there are spoilers coming later in this article.

Mars in Aquarius: Fox Mulder
The story begins with a maverick FBI agent, Fox Mulder, who has been ostracized in the agency for his unorthodox inquiries into the paranormal, and therefore relegated to a windowless, cluttered room in the basement of Headquarters. This is a very Aquarian setup for the X-Files story—an unconventional hero trying to change people’s minds. Mars in Aquarius is a match for Mulder’s character as well—the kookiness, the resistance to following protocol, and his desire to uplift humanity by informing the public about the truth of extra-terrestrials. Mars in Aquarius has a secondary symbolic meaning as a recurring motif, with themes of humanitarianism, innovation, edginess and a grand, unifying vision.

On its retrograde journey, Mars crosses over the South Node in Aquarius. The South Node represents the karmic past and the necessity of releasing the past to avoid becoming mired in it. The X-Files starts with a man with a past (Mulder), who must look into the past and let go so he can move forward. But as the story begins, he is still mired in that past. As Mars retreats further towards the earliest degrees of Aquarius, it sextiles Chiron, archetype of the wounded healer. This parallels the part of the X-Files where we learn more about Mulder’s obsession with proving the truth about aliens: when he was a child, Mulder witnessed aliens abducting his younger sister, Samantha. Nobody ever believed his story, though he remained convinced of what he saw and dedicated his life to exposing extraterrestrial activity on earth for the betterment of humanity. Mars’ encounter with Chiron shows us Mulder’s deepest wound, as well as his greatest potential for healing others. Chiron is in the sign of Aries, indicating that Mulder’s greatest pain deals with themes of courage, strength and heroism. For years after the tragedy, Mulder is plagued with feeling of futility and loss, blaming himself for not saving his sister.

Mars continues backwards until it squares Uranus, ruler of Aquarius. This square symbolizes Mulder’s continuous struggles working within the FBI. While he is one of the FBI’s best agents, his eccentric theories, his unruly behavior, and his total disregard for following the agency’s protocol have alienated him in the bureau. He is the ultimate doggedly non-conformist hero.

Mars in Capricorn: Dana Scully
All of these things are part of the backstory of the X-Files. The point at which Mars creeps back into Capricorn is where the X-Files story officially begins, with the appearance of a character who serves as a foil to Mulder: the special agent and medical doctor named Dana Scully. A woman of science, Scully introduces a skeptical filter to the show, where Mulder’s outlandish theories are subjected to her persistent disbelief. While this initially frustrates Mulder, Scully ultimately offers support by applying her rigorous methodology and logical reasoning to structure Mulder’s theories while grounding him personally. Scully is the embodiment of Mars in Capricorn—someone who applies herself in orderly, methodical, procedural, and practical ways.

Together, as a team, they pursue the truth which, at the beginning of the X-Files series, Mulder believes is “out there” —a perspective Scully ultimately comes to agree with.

Mars slows down at 28º Capricorn, and at this point in the series, Scully herself is abducted by aliens and she uncovers a conspiracy in the powerful US government to hide information about aliens. At this point, Scully begins to open her mind to what she is seeing in front of her, known science be damned. She learns how to explain the paranormal things she sees through science.

As Mars crosses back into Aquarius, Scully becomes increasingly open and rebellious towards the powers that be. As Mars is moving forward, it goes through the same aspects it had made before, but in reverse order. As Mars squares Uranus again in Aquarius, Mulder and Scully are closing in on discovering the ‘truth’ as Scully is shocked to learn she has been artificially impregnated while in captivity on an alien spacecraft.

Mars sextiles Chiron and conjuncts the South Node one final time before moving forward past 9º of Aquarius, which is the place where Mars went retrograde in the first place. At this point in the narrative, Mulder revisits his past by contacting a medium who helps him locate his sister Samantha, and he finds her old journal. This is the big revelation of the series; we learn directly from Samantha’s writing that after she was abducted, the aliens had spent years experimenting on her until they no longer had any more use for her, and then she continued to live on an old military base. Mulder’s conviction and life purpose are confirmed—a profound Chiron-style healing for him—and he and Scully commit to exposing this truth for the whole world. Perhaps Mulder will one day be able to let go of the past. We’ll never know, but we do know that this journey with its breakthroughs (Aquarius) and requirements (Capricorn) has changed him.

How will this affect you?
During this year’s Mars retrograde transit, you may experience a link to a past that needs releasing (South Node), a profound healing experience (Chiron) and a time of rebellion (Uranus). What will you do with this transit?