Mars Rx 2016 in Sagittarius and Scorpio–Star Wars, the Hero’s Loss of Innocence and the Encounter with Evil

In April of 2016, Mars turns retrograde in 8º Sagittarius, travels backwards into Scorpio, turns direct again and finishes its journey by returning to 8º Sagittarius by the end of August. There isn’t a better representation of Sagittarian and Scorpio themes than the loss of innocence and the encounter with evil—and there isn’t a better telling of this story than Star Wars.

Mars is the archetypal hero of the zodiac. When Mars turns retrograde, the Hero in all of us goes on a symbolic journey to discover what it really means to be a hero and how to take heroic action in our lives. The sign or signs Mars travels through will tell us much about the nature of the journey while any planets Mars encounters along the way will bring experiences or characters that shape the hero’s development.

Here’s the chart of the moment when Mars turns retrograde. In it, we’ll find inspiration and insight, along with clues about how to navigate this Mars retrograde period. In the blogpost thread to come, I’ll interpret these clues using a very famous story to answer a question all heroes must face, if they are to remain heroes and not “turn to the Dark side.” 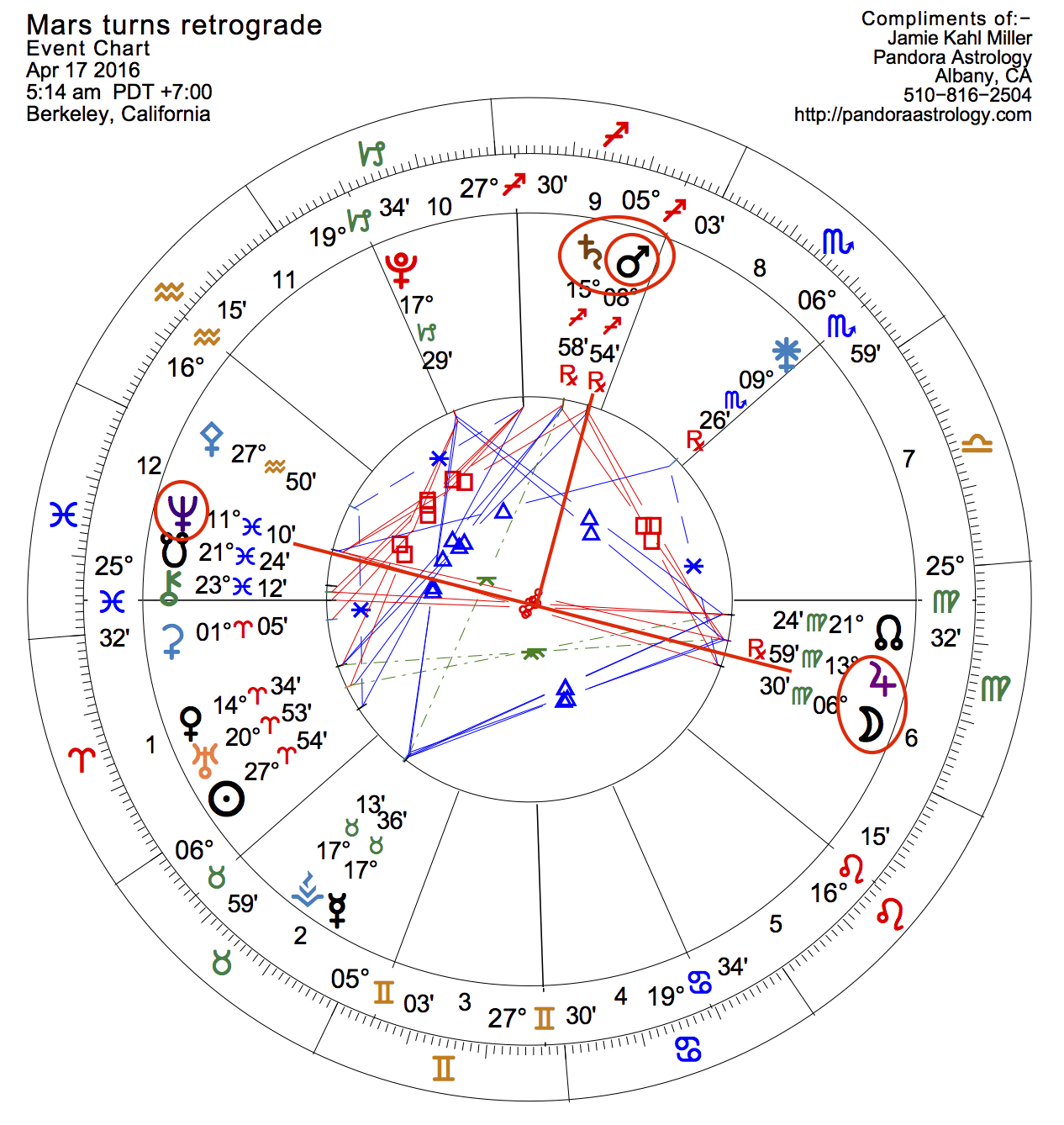 In this chart, Mars is conjunct Saturn in Sagittarius and is squared by Neptune, Jupiter and the Moon. We know that Mars will retrograde back into Scorpio. Sagittarius represents hope, adventure and a quest—and so the story begins with a youthful innocent. But evil threatens to consume the innocent hero, and thus Mars travels back into Scorpio and the encounter with evil shapes him.

Our story begins with a boy, not yet a man emotionally, although he is an adult physically. His name is Skywalker–a very Sagittarian name. He longs for adventure and watches the double sunset wondering what’s out there for him. A pair of droids enters his life bringing vital information that must be delivered somewhere. Luke will have to go on a journey, but at first he resists, because he has a life here on Tatooine.

Through the droids, Luke meets Obi-Wan Kenobi and discovers Kenobi knew his dead father. The father theme is brought in by Saturn’s presence conjunct Mars and so Luke finds in Kenobi a surrogate father and a mentor. Neptune square Mars suggests the mystery surrounding his father’s death and Jupiter square Mars suggests the unexpected journey. The Moon square Mars is an apt symbol of the scene that struck me hard when I first saw it—the corpses of Luke’s aunt and uncle burning after Imperial stormtroopers came looking for Kenobi. They are the only family Luke has ever known and now there is no longer a reason for him to remain on Tatooine. He is propelled on a journey to discover more about his father and deliver the message to the rebellion. He is also struck by the beauty of the princess for whom the message must be delivered. And so begins the saga, during which he will face his darkest enemy, discover the truth about his father, and become a man.

In many stories of the encounter with evil, the villain seems to have distinct advantages that stem from his rejection of love and ethics. This liberates him to fight strongly for his own selfish purposes. To fight a strong enemy, the hero must also be strong. But is it justifiable for him to sink to the villain’s level? The hero cannot afford this—he must maintain his ethics and his heart and his connection to those he is protecting or saving—or else he himself becomes evil and then evil has won.

How does the hero fight strongly and resist the call of darkness and its implied liberation and power? Luke Skywalker’s story contains answers to all these questions and more.

Over the course of the next few months, I’ll post articles showing milestones in this year’s Mars Retrograde journey and relating them to plot threads in the Star Wars saga. (beware please that there will be many, MANY spoilers in this post-series. If you haven’t gotten current with the world of Star Wars you may want to before reading this thread. You’ve been warned.)

You can find out more about Mars retrograde here.