The Lunar Eclipse in Taurus occurs at 16º on November 8, 2022, 2:59 AM PT. This conflicted Full Moon falls in sensual Taurus. Moreover, all recent Eclipses have been falling along the Nodal axis in Taurus and Scorpio. As a result, we are collectively learning the value of grounding, simplicity, and stability as opposed to habitual passion and drama.

This Full Moon conjuncts the Taurus North Node, emphasizing and encouraging peace. Subsequently, we will feel a strong push and pull between the stubborn nature of Taurus and the controlling nature of Scorpio. Venus, Mercury and the Sun in Scorpio may introduce obsession and control as an expression of love. In addition, Venus also suggests an impact on our finances, both personally and collectively.

Luckily, Meticulous Ceres in Virgo provides some practical, wholesome support. Meanwhile, Saturn squaring Uranus and the Moon brings in pressure, tension, and restlessness. Saturn in Aquarius brings in political themes. In fact, this Eclipse coincides with the midterm elections.

Watch our video to learn more about how this moon will impact you and how to use its potential for release to move towards a deeper security.

Details About This Lunar Eclipse In Taurus 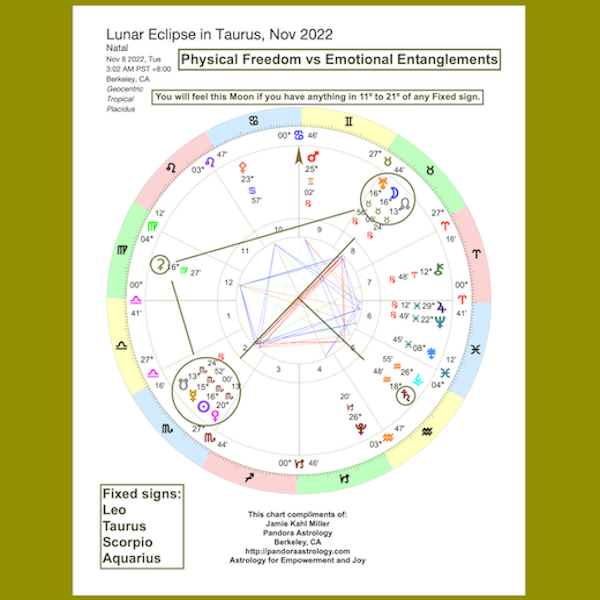 Does It Affect You Personally?

If your birthday is on any of the following dates (in any year at all), you’re most likely to experience this eclipse:
January 31 to February 9
May 1 to May 12
August 3 to August 14
November 3 to November 13

Likewise, if you have a planet in your chart placed between 11º and 21º degrees of a Fixed sign (Taurus, Leo, Scorpio, Aquarius), you’ll feel this Moon.

Remember, not every eclipse touches everyone, but when it does, it’s usually noticeable. A Lunar Eclipse is likely to bring up strong emotions and to be experienced as a subjective event. (This is unlike a Solar Eclipse eclipse, which is likely to to be marked by an external, real-world event.) You may notice your mood is affected within the week surrounding the eclipse (up to a few days before or after).

Did you really feel this eclipse? Understanding how eclipses affect your own chart can help you to discover why and find out the best ways to respond to it. The best way to learn is in a Natal and Transits reading with one of our astrologers.

Find out more about current Solar and Lunar Eclipses here.

For more of this month’s news, check out our November 2022 videos playlist on YouTube.

Frances is an astrological researcher and writer. She has been studying for over a decade through a Jungian, psychoanalytic lens, and seeks to effect understanding by articulating complexes via the symbolism of the planets.