Love Vs. Gold–Venus Retrograde in Capricorn

By JamieDecember 23, 2013September 27th, 2021Astrology for Non-Astrologers, Astrology for Students, Venus
No Comments 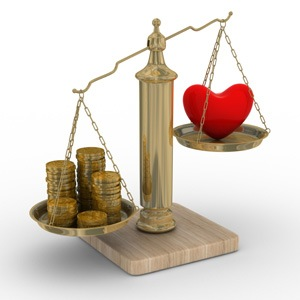 If you had to choose, which would you rather: Love or Gold? Sometimes in life we are faced with that choice, but it’s not usually very obvious.

Would you pretend to like or even love somebody for their money or their earning power? How would you explain that to your conscience?

Would you pretend to love a job because it pays you more than another job that makes your heart sing? How much “team spirit” can you raise for a well-paying job you secretly hate?

And how much self-worth are you willing to give up for money, power or status?

These are heavy questions, and Venus, which has just turned retrograde in Capricorn, is asking them right now.

Venus Retrograde in Capricorn
Venus is the astrological ruler of love, attraction, magnetism and relationships, both romantic and generically social. Capricorn, a Cardinal (driven and motivated) Earth (pragmatic and worldly) sign is goal-oriented, materialistic, practical, and willing to experience less in the present so that more is available in the future. Venus in Capricorn in a natal chart signals someone who may mistake worldly symbols of affection for the real thing.  When Venus turns retrograde in the sky, she takes us on a six-week journey to discover the true meaning of love.  In Capricorn, that meaning may be tied to worldly values.

What’s your price?
In the movie Indecent Proposal, the lead female character is asked to prostitute herself for a million dollars. It’s the kind of movie plot that’s bound to lead to a let-down, because part of you wants her to say no, and value her marriage more highly than that million dollars, while part of you wants her to take the money and bring it into her marriage, with the chance of having it all. But that is fraught, because both choices bring hidden costs. Either way, whatever she decides, you-the-viewer are going to wonder, “what if she’d done the other thing?” Almost any plot-line is doomed to disappoint, because our culture doesn’t have a myth about money and love coming together naturally.

They say everyone has a price. During Venus Retrograde in Capricorn, you might well ask, “what’s yours?” Would you rather love or gold and why? And what makes you think you can be so clever as to have both. . . with no cost?

In the next few weeks. . .
While Venus is traveling retrograde in Capricorn, I’ll examine some well-known stories about the balance between love and gold, beginning in the next post with a woman who got distracted by gold—and what it cost her.