I just saw Lincoln last night—it’s the portrait of an irascible, progressive man at the very height of his powers, in just one crucial month near the end of his life.  To find out more about who he was and what he was doing, I looked up Lincoln’s chart.

Lincoln is hated in the South and beloved in the North, still today.  Why?  What made this man push a change that his nation wasn’t completely ready for, and why did it succeed?  Why did this man care so much about ending slavery that he was willing to cripple the economy of half his country?  We go to his chart looking for Lincoln the Humanitarian and Lincoln the Warrior and right away we find them. 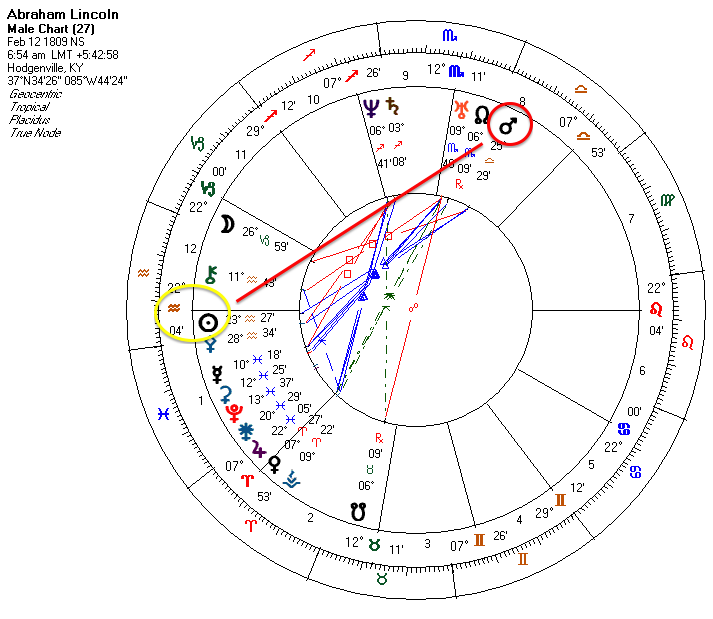 The first thing that stands out (like a sore thumb really), is that he’s a double Aquarius (his Sun and Rising, circled in yellow).  Aquarius the Humanitarian, Man of the People.  Aquarius, the sign whose ruler was behind the French and American revolutions, sign of “Liberté, égalité, fraternité!”  Aquarius, whose clarion call in America is “life, liberty and the pursuit of happiness.”

Lincoln stood strongly for these things.  But why so militant about it?  His Mars was trine that Sun and Rising (marked in red).  Mars in Libra ordinarily is peaceful—to a fault sometimes.  And Lincoln’s ambivalence about his course of action is clear.  But his alignment with the War God is also clear.  He was willing to make war to obtain a greater peace.  It was costly and he felt the pain of that.  But the man could not stand to live in a Christian nation that enslaved human beings.  In retrospect, this may seem obvious to us, but in the moment, it wasn’t at all obvious to the members of Congress in 1865.

So what made it possible for Lincoln to push the 13th Amendment through Congress and make it stick?  I’ll answer that question in a follow-up blogpost coming soon.