This year, Jupiter meets up with Pluto in a harmonious trine in Earth signs, benefitting those of the Earthy persuasion (Virgo, Capricorn, Taurus) and also prodding those of the Watery persuasion (Pisces, Cancer and Scorpio) to become more organized and collected. This transit lasts over 9 months and spans 13 to 17 degrees of Earth signs. Pluto is the Lord of Death and Rebirth while Jupiter expands and grows everything he touches. What could a harmonious connection between them mean? The vignette at the bottom of this page describes one way it could go, but first, how will you know if this even matters to you?

If you were born within the following dates, you will feel this transit weakly, and can choose to cultivate its positive effects:
November 5 through 10 of any year
May 3 through 8 of any year

How the Jupiter square to Pluto works
(this part is technical, but brief)

If your birthday falls on October 11, 2015, March 16, 2016 or June 26, 2016, then Jupiter and Pluto bring powerful help expressly for you in this birthday year—but blink and you might miss it because it may be subtle and not dramatic.

Jupiter will trine Pluto 3 times this year. The first pass happens on October 11, 2015, while Jupiter is direct at 13º Virgo and Pluto (also direct) is at 13º Capricorn. If you have anything in 13º of Virgo, Capricorn, Cancer or Pisces—like your Sun, Moon or Ascendant, etc.—you will receive strong help this year (see diagram for pass 1). If you have anything in 13º of Scorpio or Taurus, you will also receive help but it may be so smooth and easy that you’ll have to pay close attention, notice it and cultivate it. 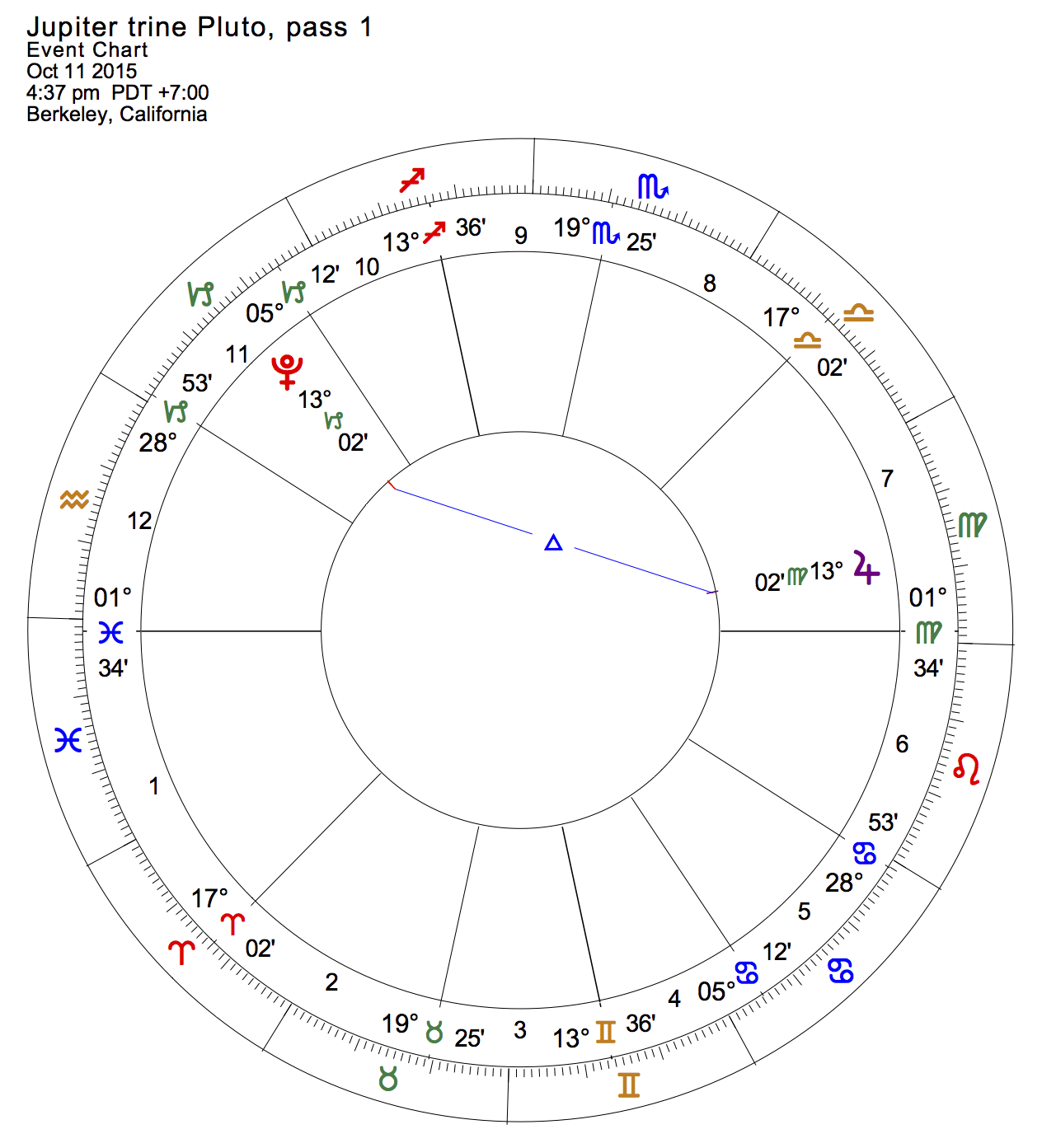 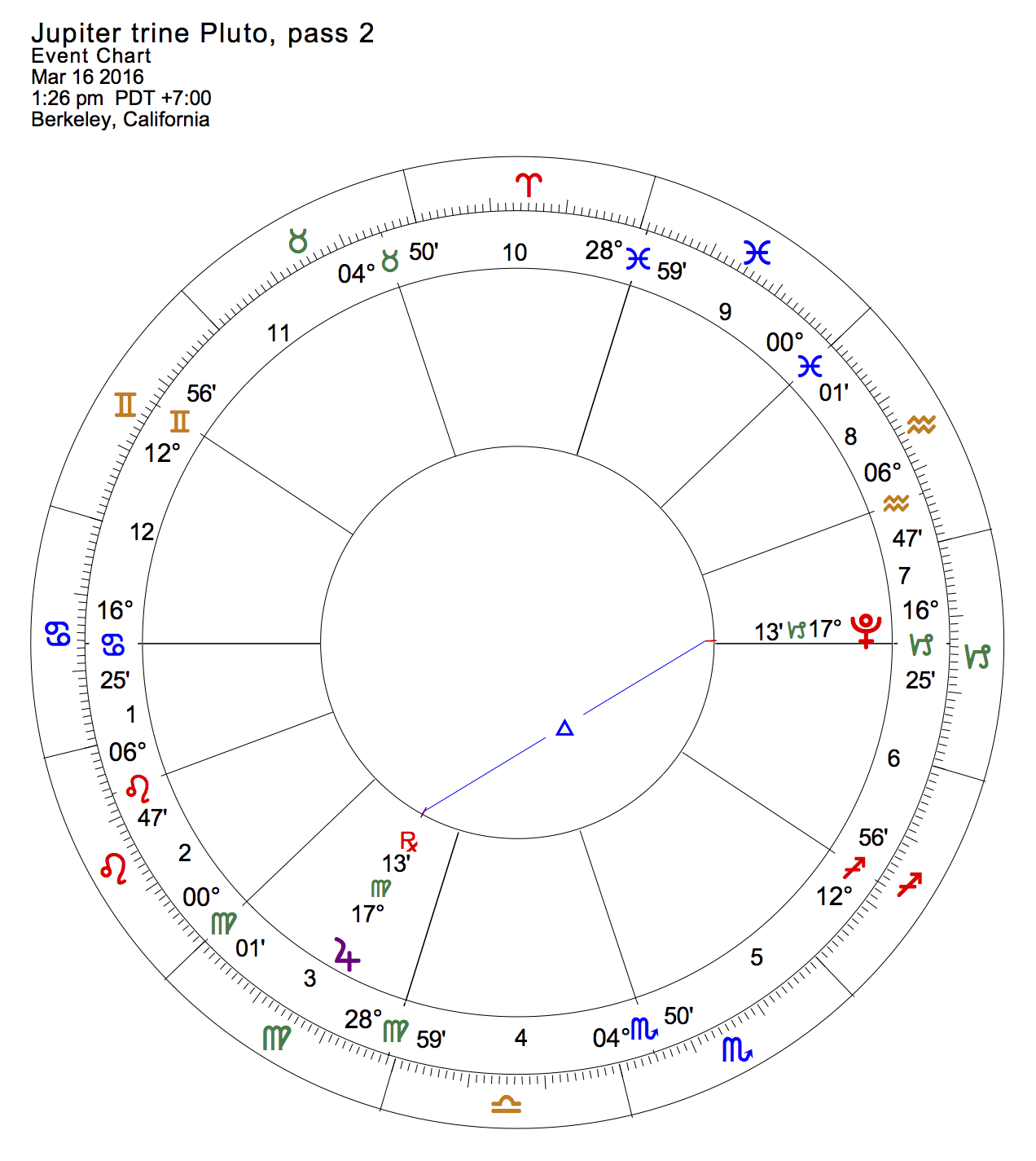 The third pass completes this transit, on June 26, 2016, with Jupiter direct in 16º Virgo and Pluto retrograde in 16º Capricorn. If you have anything in 16º of Virgo, Capricorn, Cancer or Pisces, you will experience strong help and serendipity during June. If you have anything in 16º of Scorpio or Taurus, you’ll also receive help, but it won’t necessarily come looking for you. (see diagram for pass 3). 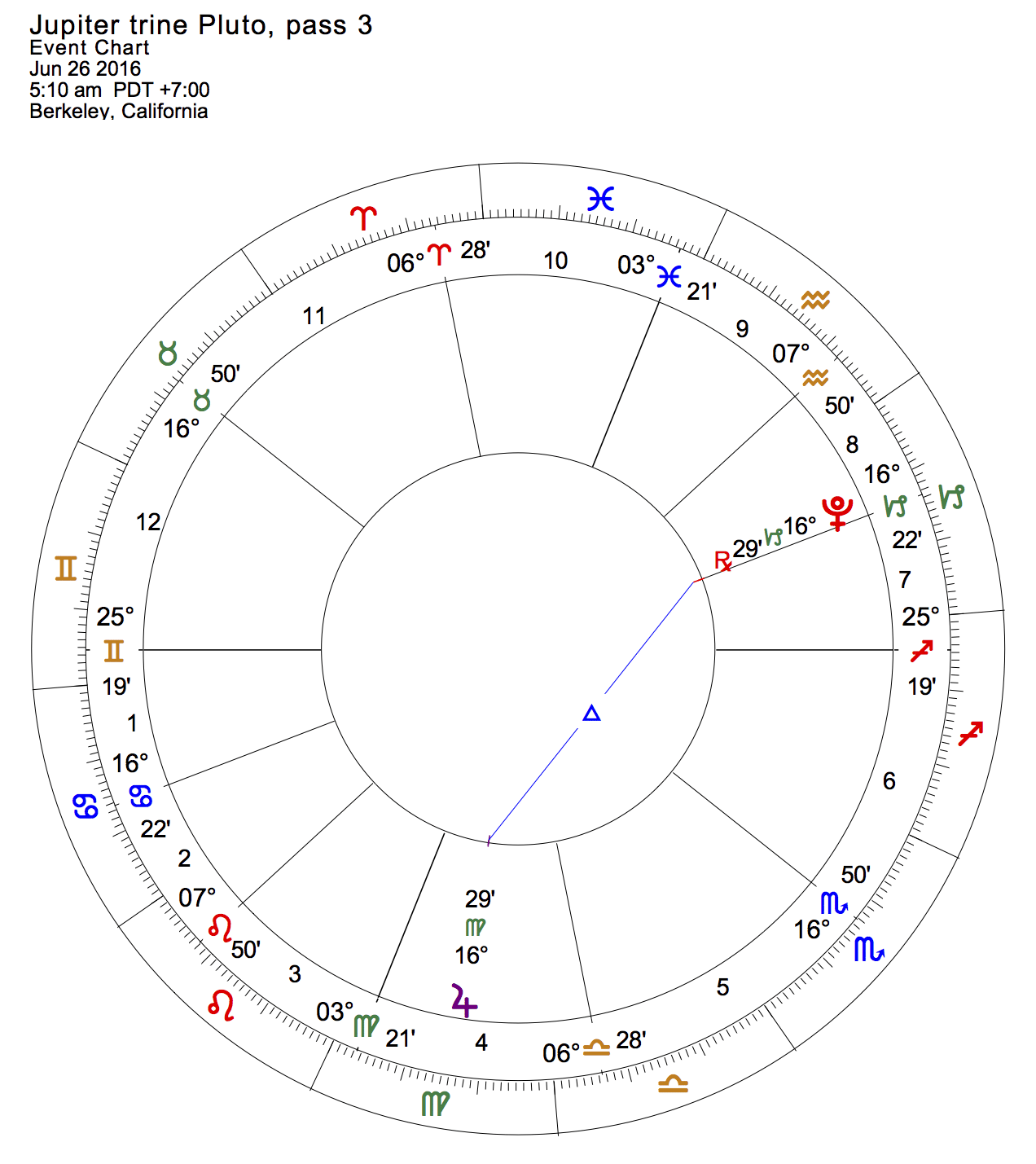 Pluto in Capricorn woke up in a mess, feeling more than a little hung-over from a business trip the night before.

“Business class is not what it should be.”  He stretched and yawned, then looked around. “This place is a real wreck! Damn that Uranus in Aries aspecting me by square—that’s the longest five years I’ve had in decades. Just when I’d gotten into Capricorn and was getting ready to build a real power base, the planet of chaos shows up. He did nothing but throw lightening bolts through my roof and fill my bedroom with Mickey Mouse balloons.” Wearily, Pluto surveyed his domain, an ancient and venerable castle with good bones but in poor condition.

“I need a stately and dignified home to befit my Capricorn status, but look at this place! The roof is falling apart and water leaks into the dining room. My bedroom is small, cramped, and filled with junk. How am I supposed to seduce anyone in there? The plants in my garden are in complete disarray—overgrown with weeds. Not that I’ve ever been good at gardening anyway. How can any of the other planets in the solar system take me seriously? I have got to upgrade my living situation. I’m going to need a lot of help.”

Disheartened by the sheer volume of work to be done, Pluto opened up a skylight and looked across the heavens for help, wondering who would be coming into aspect with him.
In the distance, Jupiter was arcing across the celestial sphere, passing through the meticulous sign of Virgo. Pluto’s heart skipped a beat. “This may be my lucky day,” Pluto thundered with delight. “Who could be better help with any big project than Jupiter?”

As Jupiter approached Pluto and his dilapidated castle, the benevolent planet was bringing order to the cosmos by organizing, fixing and tidying everything he passed. Bouncy Jupiter seemed more humble than usual in the sign of Virgo, and he soon appeared at the gate, wearing overalls and carrying an enormous and meticulously organized toolbox. “Need a hand?” said Jupiter, “I am happy to be of service to you in any way I can.” Wiping his feet carefully at the threshold, Jupiter stepped inside and followed Pluto on a tour of the castle.

“Yes, thank you. I do need your help transforming this place,” replied Pluto. “I need a home that befits my dignity. While in Capricorn, I have changed my look. See what I mean?” Pluto pointed to his closet, which contained an assortment of high ranking and distinguished outfits, including ceremonial robes for political office, coronation and even a pope’s hat. Out of a drawer peeked jeweled cuff links and a variety of military medals. Today, he was wearing an executive’s business suit, with sleek, though not flashy, Italian shoes.

“Listen Jupiter, this house needs a lot of work to catch up with my dignified and respectable appearance. I have a vision that I want to execute. I’m ready to initiate this project, and work from the ground up. While I usually like to do things on my own, I need a subordinate to contract for this project. Would you be willing to work under me?”

Jupiter in Virgo, with paint stains on his overalls, nodded his head in agreement. “Just tell me what to do, boss!”

“Well,” replied Pluto, “ what is your area of expertise?”

“I’m good at everything and I can do the job modularly, assembling it into a finished whole that takes the big picture into account.”

“Great, then let me direct you on where to begin.” Pluto led Jupiter to his bedroom. “Uranus just left all of these stupid balloons everywhere, and I can’t stand them. They make me look silly.” Jupiter immediately started clearing all of the Mickey Mouse balloons by deflating and throwing them into a big garbage bag, carefully checking in all the corners and popping everything into a giant recycling bin he conjured up in the air, which immediately disappeared afterwards.

Pluto became more and more pleased. He led Jupiter to a courtyard and pointed up.   “Uranus also ruined my roof with lightening bolts. Are you able to fix it?”

“Roger that!” exclaimed Jupiter, who was gratified by the results of his efforts thus far and eager to please. He waved his arms and a massive pile of shingles appeared in the air and began sorting themselves onto the roof, with nails flying into position. Each shingle was nailed down tightly and as Jupiter caused a little rain to fall on the roof as a testing mechanism, the water streamed off neatly with no leakage anywhere.

“Fine craftsmanship!” exclaimed Pluto. “And fast too!” But don’t you want to attend to that detail over there?” He pointed to a gutter that was sagging. Too late— Jupiter was already on it and soon all the gutters were draining water in the tidiest possible way. “Wow, Jupiter, you’re as perfectionist as I am, when you’re in Virgo!”

“True,” boomed Jupiter, “in a Mutable Earth sign I run a really tight ship. It’s nice to work with someone who appreciates that.”

Pluto was really starting to relax. “You know what, Jupiter? Let’s work together to turn this place into something spectacular. I’ve always felt that my true home would be austere, yet grand. Imposing, yet sexy. I’d like it modeled after Eastern European castles, but with all the modern amenities. I think that would suit me very well. It’s time for me to completely transform my life into what it was meant to be—even if it takes lots of work.”

Jupiter bounced up and down on his toes, getting very excited by the prospect, and the two spent several weeks working night and day to create a stately home for Pluto. When the project was complete, Pluto sighed with deep satisfaction. Even the dungeons were perfect and the underground tunnel to his main digs back home in the Land of the Dead was cleared and broad enough to transport a war’s worth of human souls if necessary. He now had a home that reflected his status, and all of the other planets in the zodiac would look to him with respect, which was what he craved more than anything. Jupiter was just as satisfied, knowing that he had provided excellent service resulting in a structure that would last through the centuries. Shaking hands, the two parted the best of friends, full of camaraderie and the pleasure of a job well done.