This year, Jupiter enters into an opposition with Uranus, which lasts ten months and spans 20 to 27º of Cardinal signs, affecting those with Sun in Libra, Aries, Cancer and Capricorn everywhere. Uranus brings revolution, revolt, rebellion and large shifts in consciousness, while Jupiter expands everything it touches. The opposition is a stressful aspect—what could this mean for us here on Earth? The script below describes one way it could go, but first, how will you know if this even matters to you?

If you were born within the following dates, you will feel this transit strongly:
April 9 through 17 of any year
July 11 through 19 of any year
October 12 through 20 of any year
January 10 through 18 of any year

How Jupiter opposed Uranus works
(this part is technical, but brief)

The connection between Jupiter and Uranus is strongest when it’s exact and there are 3 days this year when that happens. I’ll show you images of these connections below but first, please know that if one of those days happens to be your birthday or within a few days on either side of it, then Jupiter and Uranus will have powerful lessons expressly for you in this birthday year. A reading of your birthday chart (called a Solar Return) can help you discover what it means for your year and how to use it to the fullest capacity. These are the dates of the exact Jupiter-Uranus connections this year: December 26, 2016, March 2, 2017 and September 27, 2017.

The first pass happens on December 26, 2016, while Jupiter is direct at 20º Libra and Uranus is retrograde at 20º Aries. If you have anything in 20º of a Cardinal sign—such as your Sun, Moon or Ascendant, and so on—you will feel this (see diagram for pass 1). 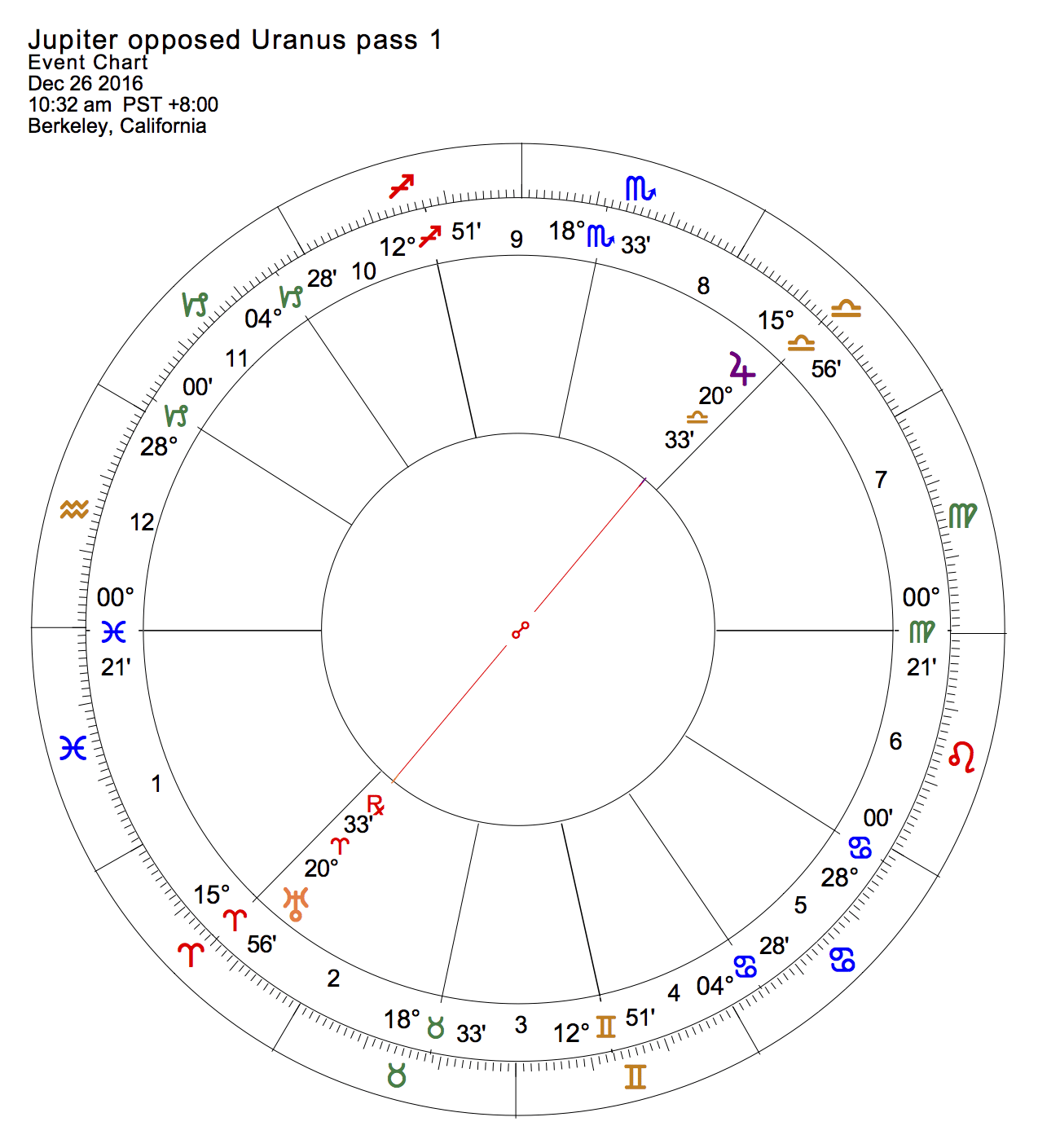 The second pass happens on March 2, 2017, while Jupiter is retrograde and Uranus is direct and both are at 22º of their signs. If you have anything in 22º of Aries, Libra, Cancer or Capricorn, you will feel this (see diagram for pass 2). 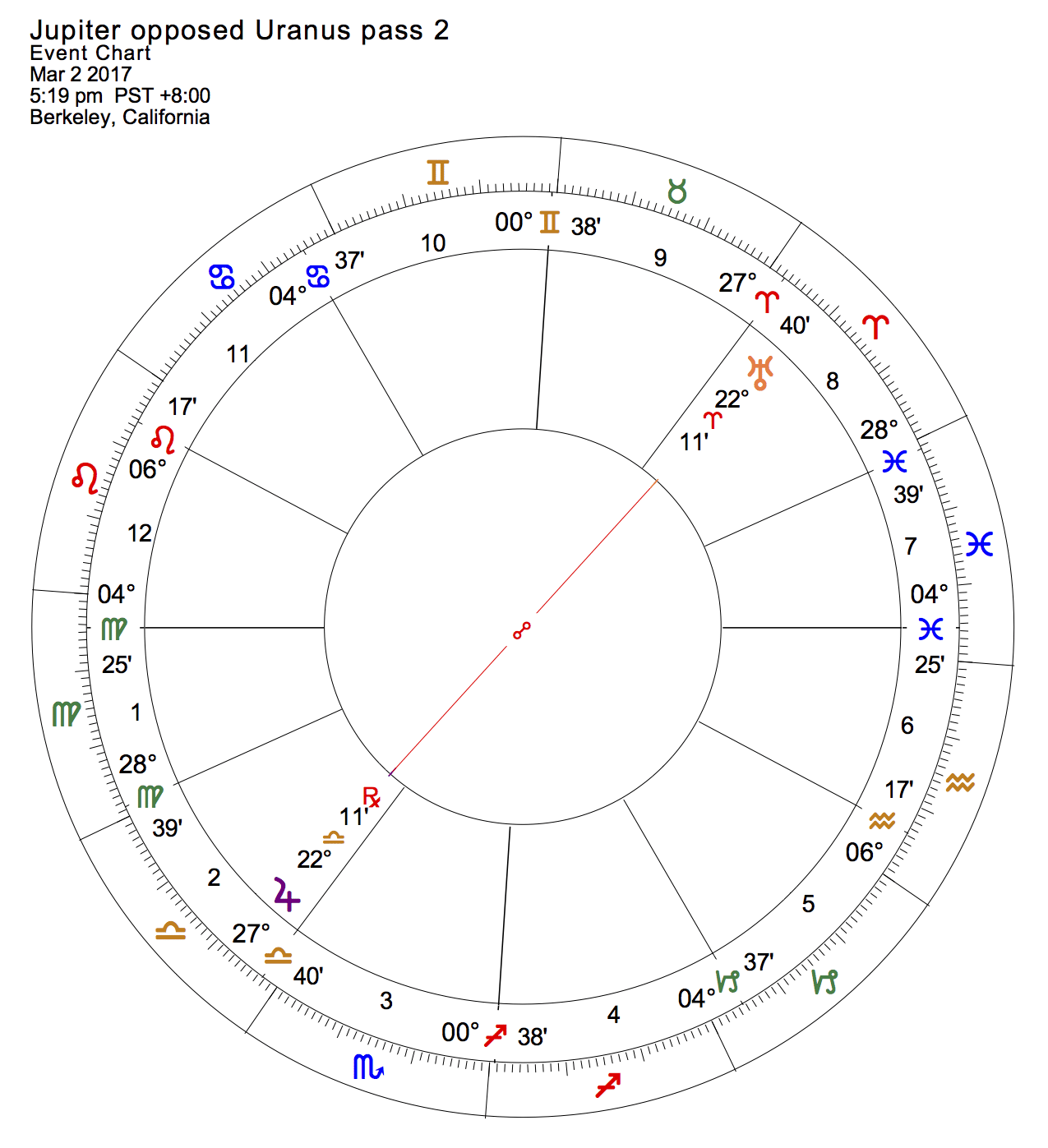 The third pass is where this transit ends, on September 27, 2017 with Jupiter direct at 27º Libra while Uranus is still retrograde in 27º Aries. This will affect you if you have anything in 27º of Aries, Libra, Cancer or Capricorn (see diagram for pass 3). 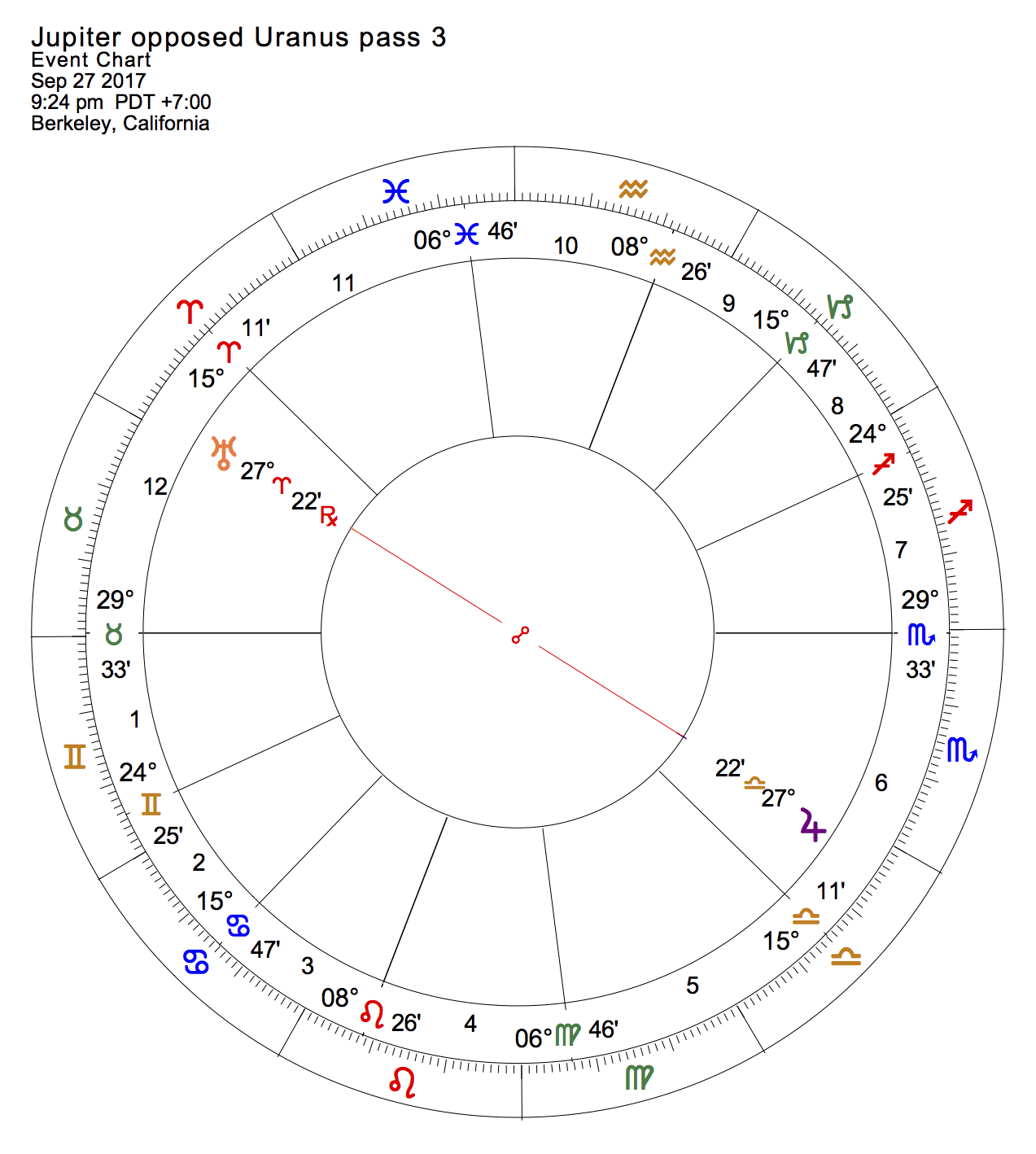 What could this stressful planetary aspect mean? The following story illustrates one way it could go. . .

Jupiter is strolling around at the top of Mount Olympus and encounters Uranus, who is wearing a bright red superhero costume and wielding a hammer.
Jupiter: Uranus dude, what are you up to?
Uranus: These really need breaking. We need some new ideas around here.
Jupiter comes closer to see what Uranus is talking about. Uranus has assembled a bunch of pieces of wood, which are nailed together in squares.
Jupiter: Are those. . . frames?
Uranus: Yes, they are! They are conceptual frames.
But before he can explain further, they hear footsteps and the sound of panting approaching. It’s Human Being, who is laboring his way up the mountainside.
Human Being: Here, Uranus, I’ve brought you some more.
He dumps about 20 more frames on the ground at Uranus’ feet.
Jupiter: Wow, feeling godly today are we, Uranus?
Uranus: You bet! Now it’s time for some destruction!
He takes the hammer to the frames, sending splinters of wood everywhere. Jupiter and the hapless Human Being cover their faces. When the noise is over, they peek out between their fingers. Uranus is looking very satisfied with himself. Human Being looks lost.
Human Being (breaking into a wail): What am I going to do without my cherished conceptual frames? How will I understand things?
Jupiter puts a fatherly arm around Human Being and leads him off to the side.
Jupiter: You know, Uranus can be that way sometimes. Perhaps it’s time you turned to religion for some answers.
Uranus: Science!
Jupiter: Religion!
Uranus: Science!
Jupiter: Religion!
Uranus: Forgive us, Human Being, it’s a sort of shared tic we have. We can’t help it.
Jupiter: Back to the point. The world is a lovelier place when you have a view that encompasses fairness.
Uranus: You only think that because you’re Libra.
Jupiter: And you only want to destroy things because you’re in Aries.
Human Being (breaking in): But which of the world’s religions is fair?
Jupiter: Umm, wish I could answer that.
Uranus (pulling Human Being aside): You can’t just accept the beliefs that were handed to you. You’ve got to experiment with life! Think differently! Outside the box! New and unusual! (He’s flushing with excitement)
Human Being: Frankly, you both scare me. Do you realize that when you shout, explosions happen down on Earth? And caught in the middle between you, what will I and all the other Human Beings do?
Uranus: Become a radical! (kaboom!)
Jupiter: Turn to religion! (crash!)
Uranus: Experiment! (bang!)
Jupiter: Grow as a person! (smash!)
Uranus: Form a hypothesis! (poof!)
Jupiter: Tell a story! (kapow!)
Uranus: Make an experiment! (bonk!)
Jupiter: Look at the big picture! (bash!)
Uranus: Distance yourself! (kabing!)
Jupiter: Involve yourself! (kaplooie!)
Human Being: It’s getting way too hot around here. I need to take a vacation someplace peaceful. This radicalized atmosphere is too much for me.
Neptune in Pisces appears, shimmering in the air like Glinda. She sweeps him up and begins to carry him away, patting his head in a soothing way. With a deep sigh, Human Being instantly goes to sleep.
Uranus: Hey, where are you going?
Neptune (as she drifts off with Human Being in tow): Off to find a nice island somewhere. And if that’s not possible, probably just going to fill up this Human Being with some escapist drugs.