By the time I saw my first episode of Star Trek on TV, the show had been off the air for 15 years and was, instead, relished as Saturday night reruns. Like almost everyone who experienced the program as part of their childhood and adolescence, I was impacted by the dream and the drama of a futuristic world where humans and aliens grappled with issues of power, domination, diplomacy, negotiation and, hopefully, peace. Star Trek was more than a television entertainment show that brought a message. It was a cultural and technological time marker.

Star Trek Went Where No One Had Gone Before

In 1969, the same year of the last broadcast episode of Star Trek, the U.S succeeded in landing the first humans on Earth’s Moon. Although I was never into the “technical” aspects of rockets like circuit boards and cooling systems, I was taken by the notion of traveling and living among celestial bodies. With the announcement that Roddenberry’s cremated ashes will be put into orbit around the Sun in November 2014, along with the remains of his wife, Majel, and James Doohan, who played Scotty, the chief engineer on the Starship Enterprise, I started thinking about the creator of Star Trek and what his birth chart might reveal. 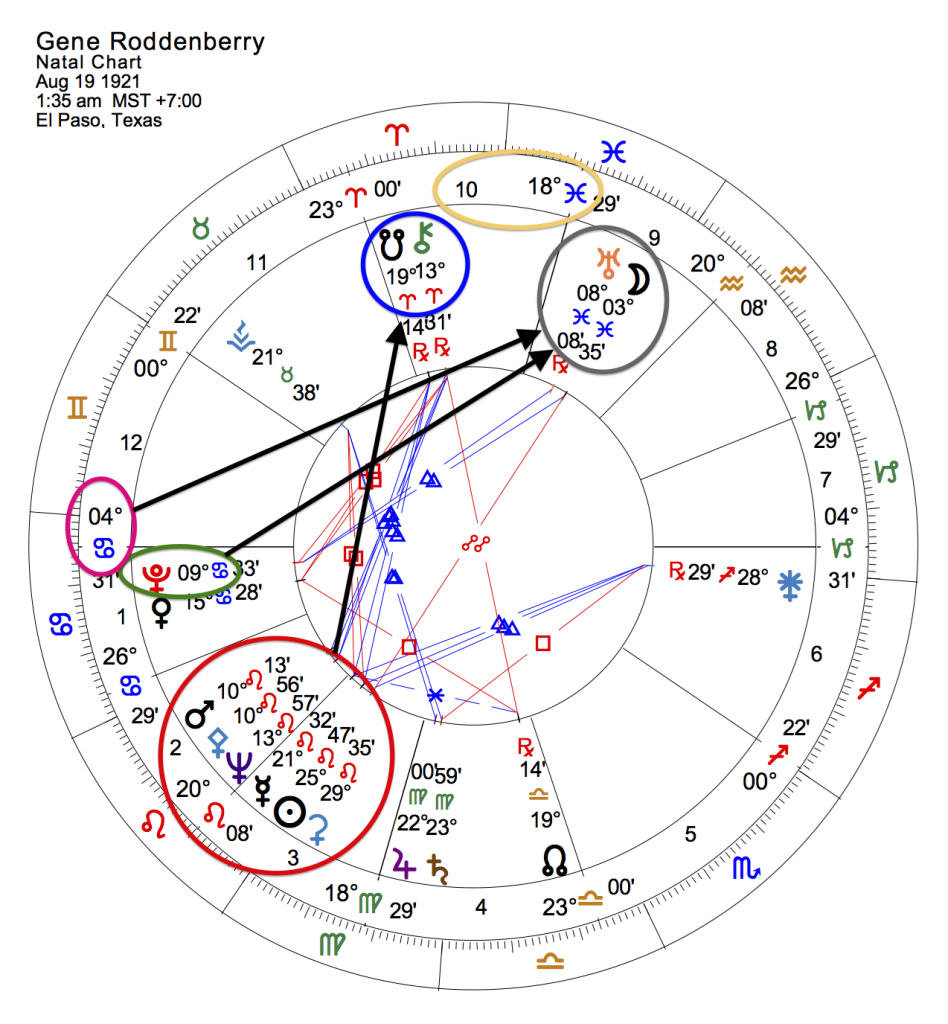 Television writer Gene Roddenberry helped to usher numerous generations into the humanitarian Age of Aquarius with his legendary characters from the Starship Enterprise. As creator of Star Trek, Roddenberry’s natal chart shows a man with enormous creative energy who could penetrate deeply into imaginative worlds with profound passion, spirit, and energy. Amazingly, four planets and two asteroids reside in the playful and performance-oriented sign of Leo – the Sun, Mercury, Mars, Neptune, Pallas Athene, and Ceres (circled in red) – indicating a strong, creative personality with strategic initiative and drive and the ability to communicate in a down-to-earth manner that affirmed his personal purpose and mission. In fact, I venture to say that taking strategic visionary action was also a very important way to heal past life trauma that was incurred in the area of career as indicated by these celestial bodies in Leo trine both the South Node and Chiron in Aries in the tenth house (circled in blue).

Roddenberry was born with Pluto in Cancer.  The Pluto-in-Cancer generation (b. 1913-1938) had an enormously strong identification with nostalgic images of the past (“the way it used to be”), the childhood home environment, and rather provincial, if not entrenched, social and family roles and responsibilities. For Roddenberry, however, his Pluto conjunct a Cancer rising ascendant in the first house (circled in green) trine to a Pisces Moon conjunct Uranus (also in Pisces) in the ninth house (circled in silver), suggests that Roddenberry felt a strong emotional urge to rebel against the status quo and mainstream for a greater life philosophy that was inclusive of all kinds of people, not just those found at home—and the harmonious trine between these Pisces and Cancer planets assured he would give himself permission to act on those urges.

Uranus conjunct the Moon in Pisces in the ninth house also indicates that Roddenberry had an imaginative spiritual depth blended with an instinctive urge for autonomy that led him on travels through different cultural world and cosmic perspectives. It was Roddenberry’s sense of adventure and love of the unknown and unexpected, along with a sense that “all is one” that allowed him to be able to portray his diverse characters, both human and alien, with enormous respect, care, and dignity. The theme of relating what is “home” to what is “far away” is repeated again in Roddenberry’s Cancer rising ascendant (circled in pink) trine his Moon conjunct Uranus in Pisces in the ninth house.

A Teller of Archetypal Tales

Finally, Roddenberry’s Pisces Midheaven (ruler of movie and television film and circled in yellow) ensured that his deep emotional sensitivities and capacity to imagine terrestrial and cosmic worlds would combine with his fiery creative passionate self-expression to enable him to give birth to fictional characters that would become archetypal heroes and heroines in universal stories. Roddenberry lived out his potential with panache and flair and, in the process, created the first major television franchise by endearing millions to his timeless creations.