By JamieMay 4, 2016September 23rd, 2021Astrology for Students, Ceres
No Comments 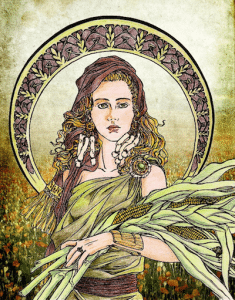 Astronomers agree that Ceres is the largest asteroid in the asteroid belt, and that the belt falls in the zone predicted by Bode’s Law. Ceres’ size and regular shape and other factors cause some astronomers to designate it a “dwarf planet” along with Pluto and other bodies in our solar system. (You can read more about the great debate over Ceres’ designation here) Ceres’ planet-like size suggests perhaps astrologers should take it seriously (no pun intended) as a possible ruler of a zodiac sign. Ceres certainly was one of the movers and shakers in Greco-Roman mythology.

After working with the 4 major asteroids for more than two decades in my astrology practice, I’ve concluded that Ceres makes a great ruler of Taurus and that using Ceres as a ruler of Taurus illuminates both the sign and the asteroid. (Or planet, whichever you prefer.)

Ceres’ themes and their mythological roots
Ceres (Demeter in Greek mythology) rules the things that connect us to the physical world: our physical bodies, the food we put into them and the money we use to sustain them. These are all parallel themes, branches from the same tree-trunk, which is rooted in our ability to feel that we belong here in the material world. Ceres is the archetype we call “Mother Nature,” through her mythological connection with the rhythm of the seasons. Her mythology also connects her to mothering, as her primary relationship was with her daughter, Proserpina (Persephone to the Greeks), who was kidnapped by Pluto, Lord of the Underworld and made to be his queen and while Proserpina was missing, Ceres’ need to go on mothering was so strong that she fostered an infant prince. There’s a whole other dimension of Ceres there, which I’ll have to put into another article. For now, I’ll just say that Ceres the goddess is mother-identified and we know her as Mother Nature and the Earth Mother.

When adding the asteroids to my astrological toolkit, I have found that they usually end up taking turf that used to belong to other archetypes, resulting in limitation and clarification of those archetypes’ themes. And so, in using Ceres to rule an aspect of mothering, it’s reasonable to ask, what does she do that the Moon doesn’t? I have come to see Ceres as ruler of all physical aspects of mothering, while the Moon rules all emotional aspects of mothering. Clearly there is some overlap between their themes, as the Moon continues to rule the breasts, and breastfeeding, but the Moon has to share rulership of all aspects of feeding and physical care with Ceres. My sessions with clients have been the proving-ground of this interpretation and my clients have responded strongly to interpretations of Ceres as another aspect of mother and mothering.

What about Exaltation, Fall and Detriment for Ceres?
When you want to see what a new planet rules, you have to look at the table of rulerships and see what’s missing. You also have to understand how the table of rulerships works. One basic principle of it is that rulerships happen in polarities. A planet which is at home in a given sign will also be in its detriment in the sign opposite to the one it rules. A planet’s sign of exaltation will similarly be opposite to its sign of fall.

Rulerships of the modern planets (Uranus, Neptune and Pluto) are well-established at this point, even though Pluto is still a relative newcomer (having been discovered in 1930). Uranus clearly rules Aquarius, taking it from Saturn, traditional ruler of Aquarius, while Neptune takes Pisces from Jupiter and Pluto takes Scorpio from Mars. Two planets remain with dual rulerships: Mercury, ruling Virgo and Gemini, and Venus, ruling Taurus and Libra. This suggests there may be more planetary bodies yet to be discovered. For myself, I’m happy with the rulership of Ceres over Taurus and am content to wait my whole lifetime for an additional planet to rule Virgo, because Mercury is so dual in its nature that it might well rule two signs.

Modern astrologers are still in process of coming to agreement about exaltations and falls for the modern planets, and even some of the original/traditional ones. It’s a messy, impassioned debate and I’ll only minimally add my voice to it here. I’m taking Pluto as exalted in Virgo, Uranus as exalted in Scorpio, Neptune as exalted in Leo. I’m also taking Mercury as dually ruling Gemini and Virgo, and being exalted in Aquarius. I have very good reasons for all of these, but this article isn’t the place for sharing them or for getting on a soapbox about them (which astrologers will readily do). Suffice it to say that the signs left in need of planets to be exalted in them include Gemini and Sagittarius. I don’t follow some other astrologers in seeing the north and south nodes of the moon as being exalted in these signs, because the nodes are not physical bodies, but intangible points along the orbit of another body (the Moon).

But of Gemini and Sagittarius, which for Ceres? It’s an important question because these two are a polarity and whichever sign is chosen will yield the other as the sign of detriment. I’ve worked on this problem in my practice for 20 years and I’ve come to a conclusion. But first. . .

. . . What do rulerships mean?
The sign a planet rules is the sign where it is at home. In its home sign, a planet is comfortable and has the fullest scope for its expression.
A planet’s sign of detriment is always opposite to its sign of rulership and is the place where the planet is the most uncomfortable. This sign gives the planet the narrowest scope for expression.
A planet’s sign of exaltation brings the planet’s finer qualities out into sharp relief the most effortlessly. It’s possible for this to be taken too far and to become excessive (too much of a good thing), but by-and-large it’s a nice placement for the native.
A planet’s sign of fall brings the planet’s worst qualities out into sharp relief and is the hardest place to express the planet well. Difficult for the native, but not impossible and sometimes yielding hard but useful life-lessons.

Ceres as ruler of Taurus
Ceres is very comfortable in Taurus and Taurus gives Ceres a lot of scope. In this Fixed, Earthy sign, Ceres can fully express her sensual, sensory nature. A well-expressed Ceres leads to the experience of living in the lap of a warm and loving Mother Nature. Ceres in Taurus yields a broad range of experiences from abundance to scarcity (summer to winter, harvest to lean) and assists the native who has this placement to develop what I call “havingness,” which is your capacity to receive, accept, have and make your own. A person with high havingness is able to receive the abundance of the universe; a person with low havingness cannot hold onto wealth, even when it is freely given to them. Ceres enjoys wealth-building, in a slow way that allows you to fully “own” and “have” what you accumulate. Ceres at her best can be described as a feeling of endless summer, when the fruit drops from the trees right into your hand, ripe, luscious and ready for consumption.

Read the next article in this thread, which describes Ceres in Scorpio, its sign of detriment.