Atalanta the Swift, Defeated by a Golden Apple

By JamieDecember 31, 2013September 9th, 2021Astrology for Non-Astrologers, Astrology for Students, Venus
No Comments The Apple
The apple is often used in literature as a symbol of forbidden knowledge, temptation and transgression, “forbidden fruit,” and by extension a symbol of love, sexuality and indulgence.  Think of the Biblical Eve, tempted by the apples of the tree of life.  Apples are also mentioned in a sexual context in the Song of Solomon.  Examples of apple symbolism abound in Greek mythology, including the golden apples of the Garden of Hesperides (which Hercules had to fetch as one of his labors).  A poisoned apple even appears in the fairy tale of Snow White.

Venus in Capricorn
The symbol of the golden apple is apt for a blogpost about Venus in Capricorn.  Venus is the goddess of love and beauty.  All things sensual and indulgent are in her domain.  In Cardinal, Earthy Capricorn, Venus likes to be focused and on-track.  With this kind of focus, temptation doesn’t occur much, but a golden apple is the very thing that might distract her and make her “sin,” i.e. “miss the mark.”

Venus in Capricorn is acquisitive, a wealth-builder and a maker of power matches.  In Capricorn, Venus is very aware of status.  The ultimate “First Lady,” this Venus craves recognition and loves to put her ambition to good use to benefit her partner and herself.  With Venus in Capricorn on his arm, a man can climb to any heights.  To this Venus, the ultimate temptation is the Golden Apple of a wealthy partner, a rich marriage, and a life of ease where hard work is not necessary.

But is that what will truly satisfy Venus in Capricorn?

Deep down, what Venus in Capricorn really desires is a partnership with shared goals—goals for each partner and goals for the relationship.  This Venus has ambitions of her own, and putting those aside to support her partner’s career can prove just a distraction from the hard work of pursuing her own aspirations.  Venus in Capricorn needs to know that both partners are building and achieving and that they are doing it together—that’s what turns her on.  And at the end of every rainbow of achievement, this Venus hopes that deeper commitment and love are in that pot of gold.

So while Venus travels retrograde in Capricorn, we need to ask ourselves the deeper questions:  Do I love my partner or his status?  What are my goals for the relationship?  Am I tempted by worldly, materialistic bling or is my love deeper than that?  Are we building love or money–and can we somehow build both? 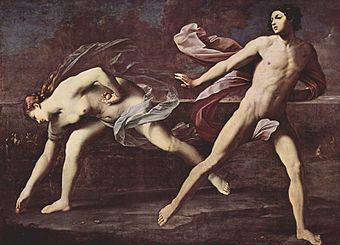 The Story: Atalanta the Swift
In Greek mythology, Atalanta was not a typical female.  She was an athlete with prowess to rival (and exceed) that of many men.  She was rejected as an infant because she was a girl, and left in the woods to die.  There she was raised by bears and learned to hunt.  She was strong and swift and eventually was reclaimed by her father as if she was a boy.  He then tried to get her married (because that was just what you did with your daughter).  She couldn’t refuse, but she could make it more difficult, so she set a trial for her suitors.  Whoever could beat her in a footrace would become her husband; whoever failed, she beheaded.  There were many takers and the heads rolled.  Finally, one man (who genuinely loved her) named Hippomenes (sometimes called Melanion) had the bright idea to petition Aphrodite for a solution.  Aphrodite gave him three golden apples and told him how to use them.

The day of the race came.  Hippomenes raced Atalanta and dropped one of the apples along the way.  She, confident in her assured victory, stopped to pick it up.  Further along, he dropped another apple.  Still sure she could make up the time, Atalanta stopped to pick it up.  And then finally, Hippomenes dropped the third apple when almost at the finish—Atalanta stopped for it and thus lost the race.  She had to marry Hippomenes but fortunately was very happy with him.

What it Means:
Atalanta was a lot like a modern career woman—happy in her independence and confident in her abilities. She was going places.  She had finally gotten in good with her father.  She was on a great track and was even able to set the terms for her own marriage (unheard of in that day) and if she’d been allowed to persist, would probably have been able to evade marriage altogether.  But she was overconfident in her abilities and thought she could afford to break her stride.  And she got distracted.  By what?  A shiny golden apple.  Bling.  Temptation.

Is this a good thing?  It depends on what you want.  Atalanta chose the golden apple and ended up with love.  But she lost her independence.  Modern women don’t want to choose between love and independence and fortunately, marriage no longer makes a woman her husband’s property.  I think the deeper question here is, should relationship stop you from the pursuit of your own excellence?  And if it does, how can the relationship adjust to allow both partners to pursue their achievements, instead of turning the woman’s energy towards the man’s accomplishments?  And further still,  does pursuit of excellence have to mean being so strong that you can’t soften for your relationship?

Venus in Capricorn can be distracted by the Golden Apple of becoming a powerful man’s First Lady.  Adorning his arm, schmoozing on his behalf and managing his social calendar can look much easier than following her own ambitions.  But her own ambitions will not stop calling her until she follows them.  Find the balance, because at the end of day—or at the end of life, really—you need to know that you did what you came here to do.  And that you didn’t give it up for love, nor did you give up love to do it.