Aquarians, Your God Is Not Who You Think

When astrologers want to understand the archetype that underlies a zodiac sign, they look to the mythological stories that center around the deity that rules the sign.  To understand Gemini, we look to Mercury, ruler of thought and ideas, wearer of the winged cap.  To understand Libra, we look to Venus, goddess of love and beauty.  Her nature as siren, tempestuous lover and self-indulgent hedonist helps us understand both Libra and Taurus, the two signs Venus rules.  Clearly Venus and Mercury were well-identified by the ancients and interpretations of their movements that worked thousands of years ago still work today.  All the other bodies visible with the naked eye (the Sun and Moon, Mars, Jupiter Saturn) were also clearly identified and associated with the right archetypal principles and so their zodiac signs are well-understood.  But astrologers have had a challenge when it comes to Aquarius.  This sign’s ruling planet, Uranus, may have been misnamed.

The deity Uranus is not one that has much mythological tradition surrounding him. There are not many stories to look to in discovering the meaning of this sky god.  We know he was father to Saturn and that Saturn overthrew him, we know he was a primordial sky god.  And that’s about it.  No long tales to tell, no intricate personality quirks.  And the things we do know about Uranus only fit Aquarius marginally.  It’s occurred to one astrological thinker that there is a different deity whose stories and personality do fit the qualities of Aquarius, and that would be Prometheus.  The astrologer is Richard Tarnas, whose discovery and line of thinking are detailed in his book, Prometheus the Awakener.

All of this gets me to my point, which is:  Aquarians, the myths of Uranus do not have a lot to tell you about your own nature.  But the myths of Prometheus do.  Here is his story . . .

Our tale begins in a time before human beings existed, when the world was fresh and new, and populated by gigantic gods called Titans.

Prometheus was one of the Titans.  Animals had already been created and they were wonderful, but Prometheus wanted to make something better, so he created Man out of clay.  He made Man in the shape of a god, which was rather arrogant of him and resulted in Man thinking a bit much of himself as well.  By the time Man was made, all the gifts of life (wings, feathers, speed, strength, fins, etc.) had already been disbursed among the animals, so that there was no special gift for Man.  Prometheus had an idea what to do about this, so he took himself to Mt. Olympus, the dwelling-place of the gods, and got some fire and gave that to Man.  This was an incredible advantage over the other creatures, because Man could keep himself warm, cook his food, and make tools using fire, and the other creatures couldn’t do that.  Fire gave Man enough safety and leisure to cultivate arts and commerce.

(Here I could tell the story of Pandora, the first Woman, but I’ve told it elsewhere, so I’ll skip over it for now.)

According to Bullfinch’s Mythology, Prometheus is represented by the Greek & Roman poets as “a friend to mankind.”  But Prometheus’ gift was gained at a price:  Jupiter (Jove to the Greeks) was angered at the theft of fire and he, as king of the gods, punished Prometheus.  Prometheus was chained to a huge rock where every day a giant eagle came and ate his liver from his still-living body.  Every night the liver grew back—so this was an unending 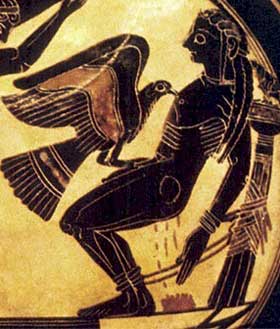 torment, because Prometheus was a god and could not die.  Prometheus was in possession of a secret about which of Jupiter’s offspring would eventually overthrow him.  Jupiter swore that Prometheus might be released if he would reveal the future usurper’s name.  Prometheus refused and stubbornly endured his punishment.

Prometheus’ release eventually came, through the actions of Hercules and Chiron—but that is a different story.

The tale of Prometheus contains a number of themes that connect with the Aquarian temperament and mark him as the originator (planetary ruler) of that temperament.

1. Prometheus loves humanity.  The sign of Aquarius is well-known for producing individuals who are “people persons.”  Some Aquarians love humanity more as a concept and less in terms of one-on-one relating, but Aquarians are famous for standing up for human rights.
2. Prometheus demonstrated a refusal to support monarchy, holding out instead for decentralizing power.  This strongly parallels the Aquarian tendency toward political activism and democracy.  Aquarius comes down solidly on the side of the people as opposed to Leo, its opposite sign in the zodiac, which represents monarchy and centralized power.  The best illustration of this is that around the time of the discovery of the planet we call Uranus (which, I’m arguing, should be called Prometheus), revolutions began happening as a phenomenon.  I’m speaking of the French and American revolutions.  The people joined together and rose up as one against an oppressive monarch, on two continents at the same time.  These revolutions were soon followed by more revolutions, in Russia, China and elsewhere.  Since the middle 1700s, revolution exists as a thing in itself, as it never before used to.  When Uranus was discovered, the Revolutionary that lay hidden in humanity’s collective unconscious reared up and was activated.
3. The theft of fire from the gods and the giving of fire, with all its power, to humanity, was an act of rebellion on the part of Prometheus.  He was a rebellious god, stuck in his own ideas and doing his own thing.  He was a trickster.  In a similar vein, the planet Uranus brings out a quality of rebellion in people when it’s strong in their charts.  Uranian types tend to be rebellious, reactive and strong-minded.  They sometimes enjoy rule-breaking for its own sake.
4. Fire itself represents insight, inspiration and one central symbol for Aquarius is lightening.  We speak of thoughts having the speed of lightening and ideas striking us like lightening.  Thought itself is the passing of electrical impulses in our brains—and it does happen at a lightning-pace.  Sudden insight and the overthrow of old thought-structures is at the very heart of the archetype of Aquarius—and it’s the source of the famous Aquarian inventiveness.

To live fully into one’s sun sign it is sometimes necessary to invite a god into one’s life.  Aquarians, your god is above all things a rebel, a revolutionary, a paradigm-shifter and rule-breaker.  Your god loves humanity, even when that’s not the popular thing to do.  Your god is willing to take the hit for humanity and endure great suffering and pain in order to take a stand for humanity’s right to be just a little bit godlike.  Your god gave us the gift of startling ideas and brilliance.  He deserves the biggest temple you can build him.

You can read more about Uranus’ discovery and rulership here: Aquarius—Not the Water-Bearer, But the Wave-Maker